To intervene may be seen as an act of kindness, but a starving lioness lurking in the background would definitely disagree. 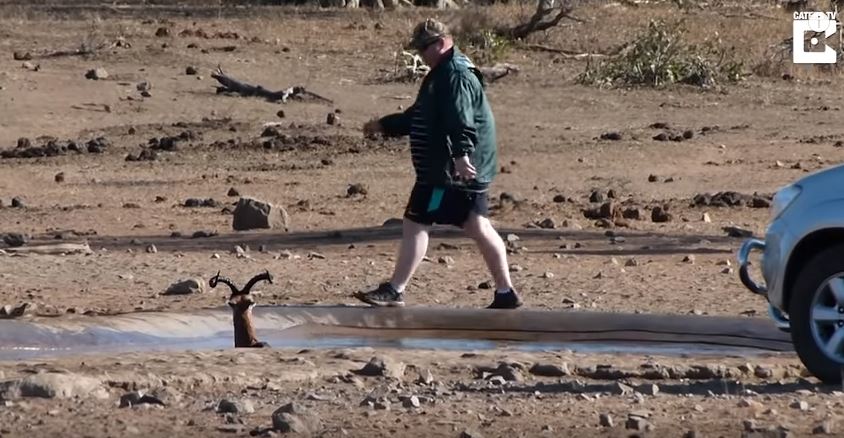 A screenshot of the video. Image/video: YouTube/Caters Clips

A video recently emerged on YouTube of a tourist pulling an impala out of a mud pocket in the Kruger National Park.

Since going viral, the identity of the man emerged as British chef Steve Haley, who regularly visits the park.

In the video, Haley can be seen driving past the impala, stopping to take his shoes off, and kneeling down to pull the animal out of a slippery tunnel of mud.

After the video, Haley understandably feels pretty good about himself, although it can be seen that the impala has an injured leg. How the buck managed to get himself lodged in the mud is not known, but he hobbles away laboriously.

Haley has been hailed a hero for saving the buck, especially after he shared the video on his personal Facebook page.

However, this is a contentious applause, as others see Haley’s intervention as something that goes against the intricate and brutal world of nature. This is because, without his intervention, the impala would probably have been eaten by a predator. As cruel as this sounds, it is the way the circle of life works, and those well-versed in regions such as the Kruger National Park would probably understand that to intervene may be seen as an act of kindness, but a starving lioness lurking in the background would definitely disagree.

Another point that people failed to raise is the issue of not being allowed to drive your car off-road to get closer to the animals. And, it goes without saying that one should never exit the vehicle you are travelling in.

It is nice to see a caring man willing to risk his life to save an otherwise doomed impala, but unfortunately, the repercussions for his actions, as well as how the rescue could have gone horribly wrong, could be dire.