The original inquest found the circumstances of Biko’s death to be 'inconclusive', although evidence pointed to him being murdered. 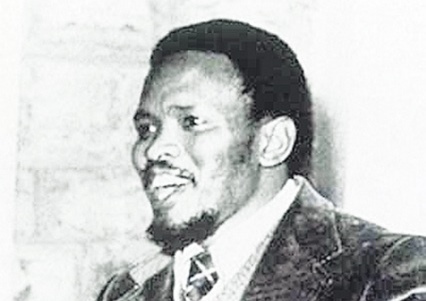 As commemoration services began in South Africa yesterday in honour of Black Consciousness Movement (BCM) icon Steve Bantu Biko, Peter Jones, one of the last people to see him alive, called on the government to reopen the inquest into the BCM founder’s death.

Revered as the visionary leader of the BCM, Biko died a horrific death 41 years ago from massive brain haemorrhages resulting from brain injury after he was beaten up by five policemen while in detention in September 1977.

Naked and chained in Pretoria Central Prison, Biko was given an intravenous drip by a newly qualified doctor who had no information about him except that he would not eat.

With Biko’s death leaving apartheid-era police minister Jimmy Kruger “cold”, the inquest found the circumstances of Biko’s death to be “inconclusive”, attributing it to “a prison accident”.

However, evidence presented during the 15-day inquest pointed to murder.

The inquest heard how Biko, who was detained in a Port Elizabeth police cell, was chained to a grill at night and lay on urine-soaked blankets.

He was stripped naked and kept in leg irons for 48 hours in his cell, before a scuffle with security police, which caused the brain damage that killed him on September 12, 1977.

After this year’s expose of the circumstances of the death of anti-apartheid activist Ahmed Timol at then John Vorster Square Police Station in Johannesburg in 1971, Jones, who served as Black Peoples’ Convention finance national secretary, wants the government to reopen the inquest into his comrade’s death.

“We have seen in the Billy Mothle judgment that Timol did not commit suicide. What stops South Africa’s democratically elected government from doing the same with Steve Biko?” asked Jones. “It is unacceptable that the inquest into Steve’s death found nobody to blame for his murder.”

Jones, who celebrated his 68th birthday in Cape Town on the eve of Biko’s 41st commemoration, is still haunted by memories of the day the two were arrested in August 1977.

When they were arrested after being stopped at a Grahamstown police roadblock, Biko and Jones were returning from a Cape Town meeting which had been cancelled.

He mused: “Throughout my life, I have been constantly reminded of the brutal loss of my friend and comrade, Steve Bantu Biko.

“The arrest, subsequent police intimidation and torture at the hands of the police was too much to bear. It was clear the police wanted to cut us down to size, even if it meant killing us.

“They would laugh at the discomfort they were putting me through. From my experience, I can understand the type of head injuries Steve suffered, looking at how I was interrogated.

“The mark on his head could have come from being pushed against a corner table while his hands were handcuffed. This was done with an excessive force which damaged his brain.”

Jones said the police interrogation “could not yield the desired results” as “there was nothing illegal they could charge us with”.

Reflecting on Biko’s black consciousness (BC) legacy, Jones said: “I am always reminded of Steve’s remarkable life, what he developed through his ideas.

“He was able to generate ideas among students and the community, with the most obvious being BC. BC was the weapon Steve wanted us to use to break down tribal and racial division among us by focusing on unity across the spectrum of black people.

“Steve’s teachings are more relevant today than ever before to restore our pride and dignity as black people.”

Jones said he found it “agonising to see our people neglected by a government they voted into power.

“From council to national government level, there is lack of service delivery. They need a heavy dose of BC.”

Motorists urged to buckle up and stay safe as long weekend traffic picks up
1 day ago
1 day ago
PREMIUM!

Motorists urged to buckle up and stay safe as long weekend traffic picks up
1 day ago
1 day ago
PREMIUM!