Mariandra Heunis recently uploaded a video to Facebook with a message for President Cyril Ramaphosa, as well as residents in the US. 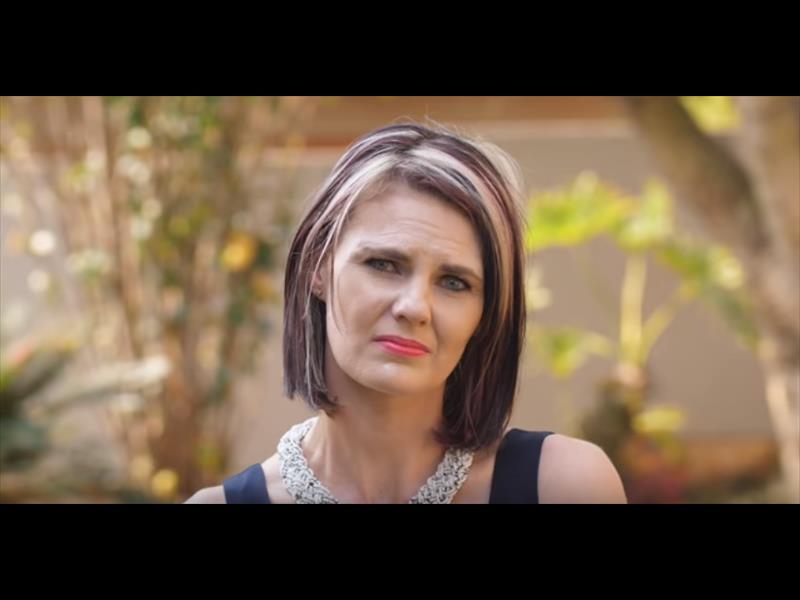 Mariandra Heunis has received a serious backlash after posting a video detailing the attack on her family in 2016.

A brouhaha has erupted on social media over a video released by a north farm attack survivor.

In the video, Mariandra Heunis has a message for president Cyril Ramaphosa as well as residents in the US against the backdrop of the president telling the media in New York that “there were no farm attacks happening in South Africa”.

She then tells the story of how her husband, Johann, was shot in front of her and her daughter in October 2016 on the Leeufontein, Kameeldrift smallholding, reports Pretoria North Rekord.

Heunis and her children have since moved to Centurion.

Heunis also shared her story earlier this year at the launch of the AfriForum deputy CEO Ernst Roets’ book Kill the Boer.

She told the media how she, her husband and six-year-old daughter awoke to discover that two armed suspects had gained access into their home.

“They demanded money and we told them we didn’t have any. They shot my husband five times in front of me and my daughter. When my daughter offered them the money from her piggy bank, my husband got up one last time and pleaded with them to leave,” said Heunis.

It was at this time that one of the attackers told the other “just kill him brother” and Johann was shot in the head.

Heunis was 36 weeks pregnant with their fourth child, a boy.

She said this week she had received “several threatening and malicious messages” on social media over the recording.

The video, in which she talks about farm murders, went viral last week.

She voices a message for President Cyril Ramaphosa as well as residents in the US.

This came against the backdrop of the president telling the media in New York: “There are no killings of farmers or white farmers in South Africa.”

Heunis then tells the story of how her husband was shot in front of her and her daughter in their home on a smallholding in Leeufontein, Kameeldrift.

Messages of support for Heunis poured in on social media, but so did a number of messages criticising the video.

“A lot of the messages I received after publishing the video was very hurtful,” Heunis told Pretoria North Rekord on Tuesday.

One of the messages her public Facebook page led to sharp words between Facebook-users.

Moruti Thabile Thabang Malapane wrote: “Mariandra Heunis …. You expect everyone to pity you for the murder of your husband, right. here is what i think, i think they shouldnt have spared you and your 6 years baby because you are tasting the poison that you planted in the hearts of africans” (sic) 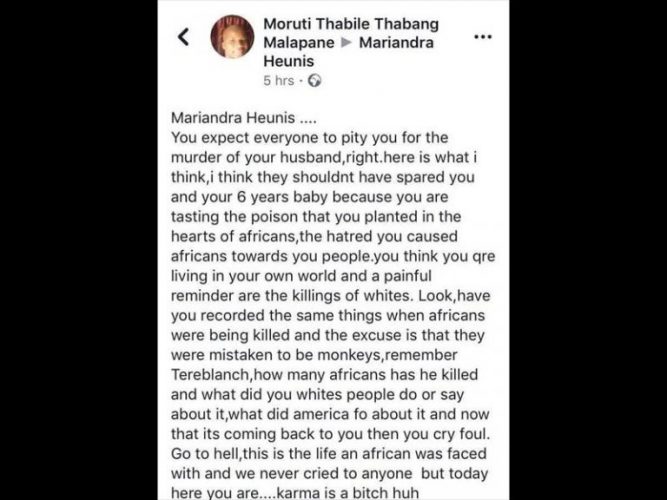 Heunis said she planned to take steps against the people who posted malicious messages or who made threats towards her and her family.

“It is hurtful and uncalled for,” she said.

“Even though I never mention any race in the videos, a lot of people assumed I was talking about just white farmers being killed – which is not true.

“People of all races – residents, employers, and employees – everyone on farms are at risk.”

Heunis said the aim of the video she shared was to create an awareness that “farm attacks were not ordinary house robberies”.

“All I want is for our government to recognise and admit that farm attacks are a unique crime.”

“I don’t hate the men who killed my husband. After praying for so long about it, God gave me the strength to forgive them,” Heunis said.