Mlungisi hits paydirt, with the help of Tembisa Self Help Centre

The community centre is run by, and supports, those with disabilities with everything from supervision to medication and nutrition. Mlungisi Mavimbela pushes his trolley that he uses to collect recyleable bottles, boxes and plastics at Esangweni in Tembisa, 11 October 2018. Picture: Nigel Sibanda

You have seen them around. They are out every day, usually by the crack of dawn. They wear jumpsuits, reflective vests, or even plain street clothes, but are most easily recognised by the cart full of someone else’s recyclables dragged behind them.

Mlungisi Mavimbela is one of these collectors, but there is something different about him. You’d recognise him easily around Tembisa, where he works. His smile and gregarious nature are infectious. Anyone lucky enough to cross his path will certainly leave with a smile.

Along with several other entrepreneurs, Mlungisi operates out of the Tembisa Self Help Centre, a community centre that is run by, and supports, those with disabilities with everything from supervision to medication and nutrition.

The centre provides employment to those with disabilities who might otherwise be unable to hold a job. People like Mlungisi.

It operates as one of 45 buy-back centres for the recycling firm Mpact, who pays these centres and collectors for the recyclable material they provide. 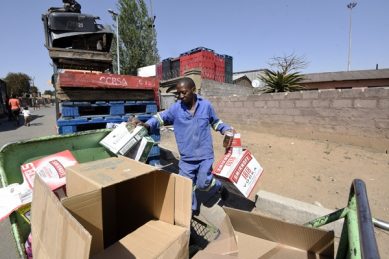 Mlungisi suffers from a mental disability, which makes it difficult for him to speak and communicate properly.

It was a challenge for Mlungisi to find and hold a job in the past, but currently, he is doing just fine.

“We allow beneficiaries to do projects to help themselves, such as recycling,” says Calvin Stemele, manager of the centre.

Stemele and the centre provide 70 other beneficiaries like Mlungisi with the support they need. Since his arrival in 2014, the centre has become a refuge for many in the Tembisa neighbourhood.

“We are perceived as a second home to many beneficiaries,” Stemele says. “They feel bad about the weekend and no work. They enjoy being here.” 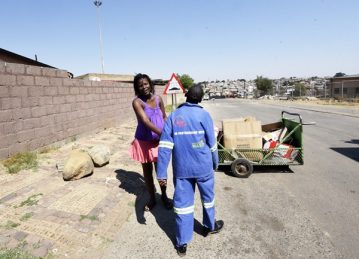 In fact, he works weekends as well. For him it isn’t a burden. It isn’t a daily slog where 5pm means a respite from work and a chance to relax, before starting it all over again. He relishes the chance to be an entrepreneur, and uses his earnings to support both himself and his grandmother, with whom he lives.

“He wants to find himself here every day,” says Stemele. “He does not understand taking leave.”

Every morning since 2013, Mlungisi wakes up at 5am and begins his route. He works constantly, all with that infectious smile and attitude.

In that time, he has become a staple of the community, a key figure that everyone recognises.

It doesn’t hurt that he cleans up the city in the meantime, one bottle, can and piece of paper at a time.