One person has died after a fire ravaged through the informal settlement. An aerial view of the destruction. Image: Twitter/@Our_DA

The City of Cape Town has confirmed that one person has died after a fire destroyed hundreds of homes in Khayelitsha informal settlement in the early hours of Saturday morning, reports EWN.

Residents running through the rubble in attempt to salvage what they can as work gets underway to clear up the site. #KhayelitshaFire @WeekendArgus @IOL pic.twitter.com/Ulec2bXMrk

Mayoral committee member for safety and security JP Smith estimated that between 400 and 500 homes were destroyed.

The fire was brought under control, and authorities have yet to confirm the official number of injuries and deaths. 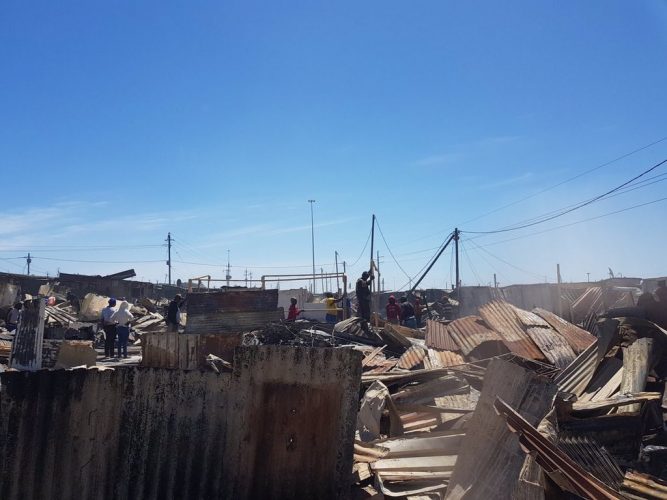 Khayalitsha after a fire ravaged through hundreds of homes early this morning. Image: Twitter/@planetshakersSA

Western Cape leader Bonginkosi Madikizela and Premier candidate Alan Winde arrived in Khayelitsha to address residents affected by the tragedy. Residents were told not to begin building new structures until authorities clean up the site.

Winde appealed to the City to help displaced residents by donating essentials, which can be dropped off at the Kyalitsha Fire Station.

On the site of the horrific #KhayelitshaFire of this morning. Appealing for any donations from the public to be taken to the Khayelitsha Fire Station. pic.twitter.com/BZ3ufu6HDh

“We stand with the community of Khayelitsha in this time of utter devastation. All resources are being mobilised to support the affected families,” the DA tweeted, sending their condolences to the family of the deceased.

According to IOL, community halls are being organised as temporary housing for the displaced residents.

Updates will follow as more information is made available.