Within hours taxis started arriving with people running for their share of the meat. After being towed out to sea from Westbrook beach on Sunday, strong onshore winds blew the carcass of a Southern Right whale right back to shore on Monday, eventually washing up at Peace Cottage near Umdloti, reports the North Coast Courier.

Specialised Rescue Unit, together with the KZN Sharks Board, received a report about a large whale carcass that had been spotted near the Tongaat River Mouth early on Sunday morning, moving inshore towards Westbrook.

“We towed the carcass quite far out to sea. However, the strong winds blew it back in overnight,” said Specialised Rescue Unit’s Quentin Power.

As it has now washed up on to the rocks at a rather secluded beach, to tow it off would prove to be a massive challenge. “Because it is deceased and completely stranded, the eThekwini municipality will now be involved in its removal.

“The most likely option for them at this stage would be to chop the carcass up and remove the pieces,” said Power.

The cause of death is unknown, with most of the injuries stemming from shark bites. Sharks have nibbled the carcass, making it hard to determine cause of death. Picture: Luke Patterson.

“Because it had been nibbled on so much it is difficult to say whether it had been struck by anything,” said Power.

Westbrook-based photographer Luke Patterson heard the news of the whale, and made the 2km trek along the beach to Peace Cottage from Breakers Hotel, following the scent and trail of whale blubber, to snap some shots of the massive creature. 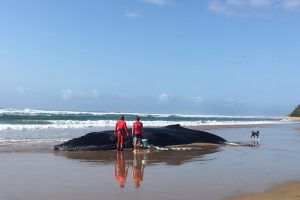