While some believe legal trade of horns would help preserve rhinos, others see the move as a death warrant for the species. 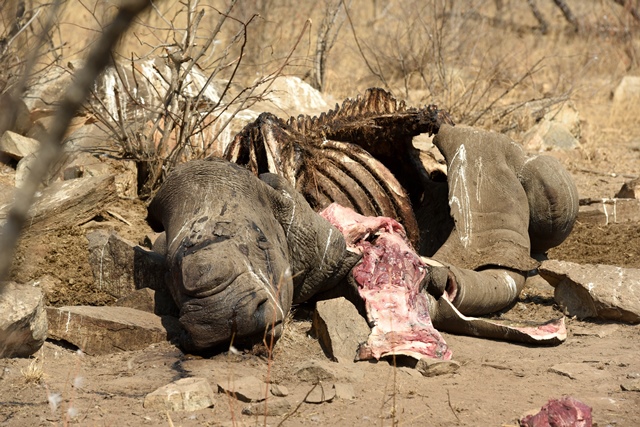 A rhino carcass that was poached in the Malelane section of the Kruger National Park, 21 August 2018. Picture Neil McCartney

Conservationists have condemned the Chinese government’s decision this week to overturn a 25-year ban on trade in rhinoceros horns and tiger bones as a death warrant for these endangered species.

Although rhino backers such as John Hume and South Africa’s Private Rhino Owners Association chairman Pelham Jones have been campaigning for years for the international trade in rhino horn as a way to preserve the species and end illegal trade, the World Wildlife Fund (WWF), the Humane Society International and Save the Rhino International have expressed grave concern about the move.

The Chinese State Council announced on Monday it would allow horn and bone products from captive-bred animals to be traded under “special circumstances”, with use supposedly restricted to antiques and in hospitals recognised by the State Administration of Traditional Chinese Medicine.

The WWF has called on China not only to maintain the ban on tiger bone and rhino horn trade, which it said was critical in conserving these iconic species, but to expand the ban to cover trade in all tiger parts and products. WWF Wildlife practice leader Margaret Kinnaird said it was deeply concerning that China had reversed the ban, allowing a trade that would have devastating consequences globally.

“Trade in tiger bone and rhino horn was banned in 1993. The resumption of a legal market for these products is an enormous setback to efforts to protect tigers and rhinos in the wild.

“China’s experience with the domestic ivory trade has clearly shown the difficulties of trying to control parallel legal and illegal markets for ivory.

“Not only could this lead to the risk of legal trade providing cover to illegal trade, this policy will also stimulate demand that had otherwise declined since the ban was put in place,” she said.

Fiona Miles, director of conservation group Four Paws in South Africa, described the move as shocking and called on governments across the globe to put pressure on China to reinstate the ban and to stop undermining the protection and welfare of the endangered species.

She said rhinos across the world were already under threat and the victims of poaching, while tigers were bred in horrible conditions to exploit these animals for commercial purposes.

“The Convention on International Trade in Endangered Species clearly states that tigers should not be bred for trade in their parts and derivatives, which raises the question: where will these animals come from? This opens the door to devious practices and is of great concern to us,” she said.