ANC NEC members sang for the party secretary general as the heavyweights sipped champagne from their glasses. 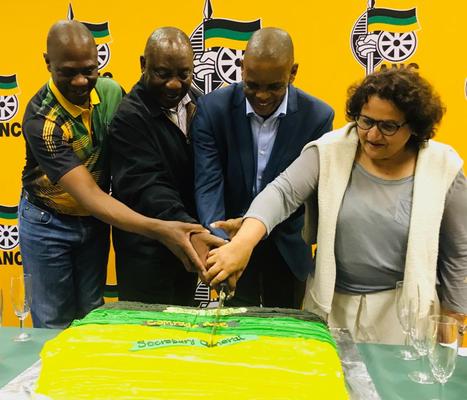 “We take a lot of pleasure and joy to wish you a happy birthday on a very special day when the NEC is meeting. It isn’t every leader of the ANC who gets birthday wishes from such a galaxy of leaders all gathered at the same time,” Ramaphosa told Magashule.

“It is indeed a special day, with its own Ace Magashule characteristics. You turn 59 today. The secretary general is still growing up. You can see today he appears even more, especially handsome. I think he’s even going to get more handsome by the years and also hopefully [he gets] wiser.”

Ramaphosa said Magashule was part of the ANC top leadership working tirelessly to forge unity in the ANC and a renewal of the governing party.

Ramaphosa, joined by Magashule, ANC treasurer general Paul Mashatile, and ANC deputy secretary general Jessie Duarte cut the birthday cake, which was in the party’s green, black, and yellow colours as they popped bottles of champagne.

The rest of the ANC NEC members sang “for he’s a jolly good fellow” as the the heavyweights sipped from their glasses. Former ANC president Jacob Zuma was also in attendance, sitting in the last row among the rest of the NEC members.

The NEC convened in Pretoria to strategise and formulate measures to revitalise its structures within communities to ensure it wins “resoundingly” in the 2019 national and provincial elections.

“We’re engaging around the issues of unity and renewal, rebuilding the structures, and consolidating the ANC to an overwhelming victory next year. We have called it an extended [meeting of the NEC] because we have also called the top five of provinces,” said Magashule.

“They are all here so that when we discuss the issue of unity and renewal, everybody is on board. We have agreed that moving forward people must meet and have ANC meetings. People must engage. Provinces must be able to invite one another so that people and leaders don’t meet in corners,” he said.