Fikile Mbalula says if Ramaphosa was lying about the donation he would have concealed it rather than respond in public. 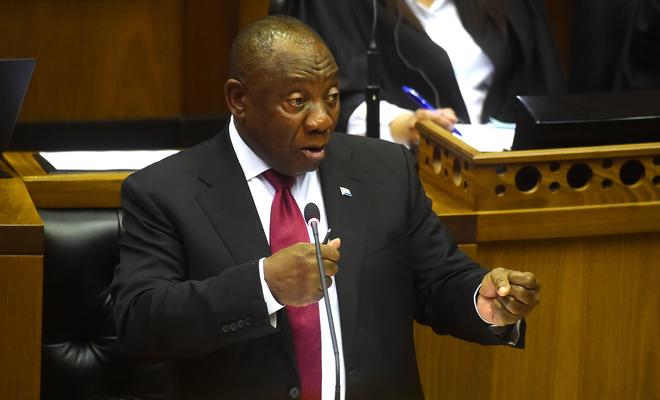 “The Bosasa issue is one the president addressed with the National Assembly where the question was posed for all South Africans and ourselves to hear his response,” Mchunu said.

The controversy was recently sparked by a parliamentary question from Democratic Alliance (DA) leader Mmusi Maimane.

Maimane told the president he had evidence of a questionable R500,000 payment made to Ramaphosa’s son, Andile – an accusation Ramaphosa denied.

“It was brought to my attention a long time ago and I proceeded to ask my son what this was all about,” the president said.

“He runs a financial consultancy business and he consults on a number of companies and one of those is Bosasa, where he provides services of entrepreneurship, particularly on the procurement process, advising both local and international companies,” was how Ramaphosa had responded to Maimane’s question.

Mchunu said following Ramaphosa’s response in parliament other issues had arisen around the Bosasa issue, which included the fact that Ramaphosa had written back to Speaker Baleka Mbete.

“What we are saying is that if there are more issues to be clarified, the president and those he worked with at that time, they are better placed to deal with the matter,” Mchunu said.

He added that the ANC supported statements made by the president about the donation.

“We trust that now that the president is back from overseas, he is going to deal very, very adequately with that particular matter,” Mchunu said.

He gave the assurance that the ANC would not drag out the matter over a long period of time.

“But we should not deal with this matter as if the bill has been passed, it has not been passed,” Mchunu said, adding that in due course the matter would be laid to rest.

The governing party’s head of elections, Fikile Mbalula, said it was encouraging that society responded overwhelmingly, except for the ANC’s opponents, to Ramaphosa’s gesture and initiative of responding to the issue with the aim to bring clarity.

“Remember, President Ramaphosa was not put under pressure by anybody to make those revelations. He would have concealed them if he was a crook and basically buried it because it has far-reaching consequences,” Mbalula said.

Mbalula added that though the question posed by Maimane had not been in line with the order paper, Ramaphosa deemed it fit to respond and later looked into the matter and gave a detailed and honest response.

Mbalula further said that the opposition was quick to say Ramaphosa had lied about the matter even after the president had looked into it.

“How do you accuse a person of a lie when he basically got back, checked the facts and dealt with the facts himself to clarify,” Mbalula asked.

He reiterated his point that the country’s citizenry has welcomed Ramaphosa’s response and handling of the matter because the president displayed “ethical leadership”.

Mbalula said the ANC was not of the view that the matter had affected the president’s stature.

He accused Maimane of grandstanding, tasking journalists to question the DA leader about donations made towards his party’ campaigns.

“Mmusi Maimane was one of the people who got donations to support his candidature for the DA,” Mbalula said.

He added that Ramaphosa has stated that he was prepared to pay back the money.