Instead of merely proving her wrong, as she has requested, the EFF leader has continued merely to insult her and other detractors. 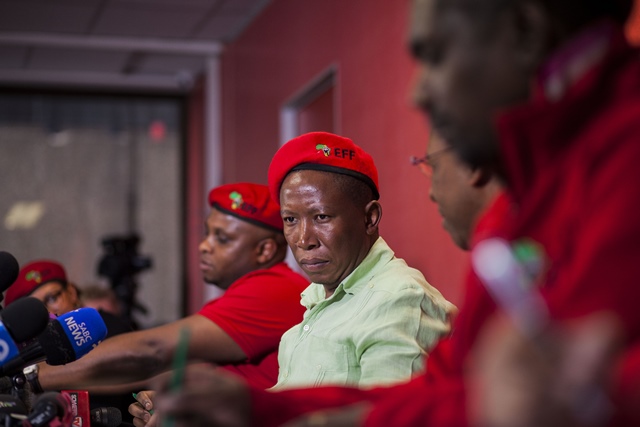 In an extraordinarily angry tweet on Saturday night, EFF leader Julius Malema hit out at investigative journalist Pauli van Wyk after she shared an editorial from the Mail & Guardian that was critical of him.

She wrote that Malema “has to take responsibility for violence meted out to journalists. He is stoking the flames of a campaign against journalists whose work he disputes … and ultimately endanger[s] the lives of journalists.

Malema responded: “You are sick, go to hell satan.”

You are sick, go to hell satan

Malema was taken on by many followers, some of whom said he was being immature.

He responded cheekily: “You think I care.”

When another person said one shouldn’t speak “to a woman like that”, he answered, “I just did, so what?”

I just did, so what?

It’s not the first time Malema has name-called Van Wyk. It’s also not even the first reference to Satan. In an apparent response to a recent damning news article about him and the EFF, Malema retweeted a screenshot highlighting that Van Wyk supposedly considers Satan her hero, which she had originally meant as a joke.

Much of Twitter was appalled this week by the information presented in Van Wyk’s investigation of how at least about R1.8 million reached Malema, his deputy Floyd Shivambu and the EFF from the now liquidated VBS Mutual Bank.

Van Wyk described this money as the “proceeds of crime” and that both men would have known this while participating in the alleged scheme involving Shivambu’s brother and Malema’s cousin through a network of front companies.

Malema had earlier denied to Van Wyk that there was any truth to her story, while the EFF itself continued to defend its leaders.

Many on Twitter on Wednesday expressed a desire to see a proper investigation from and prosecution by authorities, if indeed the EFF’s top leaders have enriched themselves criminally, as Van Wyk insists they have.

Van Wyk has said in interviews that she would encourage Malema to either show her evidence of where she is wrong, take her to the media ombudsman or even sue her, but the “online violence”, insults and threats against her were “totally unacceptable”.

EFF spokesperson Mbuyiseni Ndlozi shared a clip of the late Winnie Madikizela-Mandela saying she became disillusioned with the media.

How I feel these days about SA media… pic.twitter.com/cuoy5GGTma

The South African National Editors’ Forum (Sanef) said on Saturday it would urgently seek a meeting with the leadership of the EFF following threats made mainly to women journalists by Malema and other EFF leaders on social media and at various political rallies.

“Earlier this week, Malema named several journalists and called on EFF supporters to ‘deal with them decisively’,”  Sanef said in a statement issued after its last council meeting for 2018 on Saturday.

“Following his [Malema’s] comments, we have seen some of the journalists physically accosted and abused on social media. One journalist was verbally threatened outside the venue of the Zondo commission, where Malema had made some of these threats. In another incident, a senior editor [Ranjeni Munusamy] was accosted by three men who shouted her surname and mocked her while she was out shopping,” Sanef said.

A series of steps would be urgently undertaken to stop unacceptable, inflammatory remarks by Malema and other EFF leaders. These incidents were just one example of a series of abusive comments and threats by politicians to journalists and could not be tolerated.

“There is a real danger as they filter beyond cyberspace and become physical threats. Criticism is part of democracy but hate speech and sexually abusive threats online and bullying are out of order and can endanger the lives of journalists. They also have a chilling effect in newsrooms, with specifically younger journalists feeling fearful and intimidated and thus withdrawing from critical reporting on politicians,” Sanef said.