ANC must get a two-thirds majority, Zuma says, adding ‘deal with me’

The former president says black voters and political parties with similar ideologies to the ANC should also vote for the governing party. 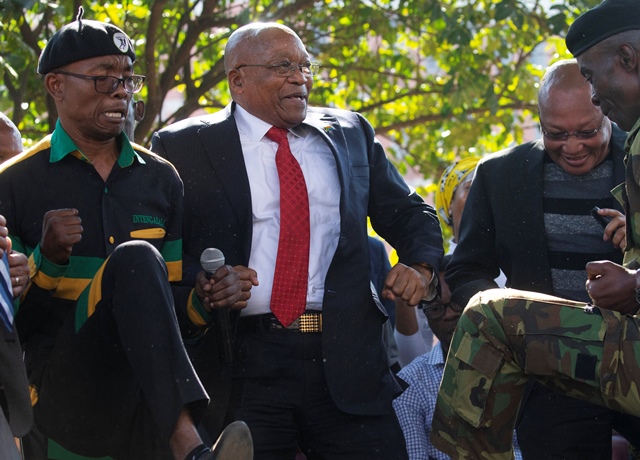 Former president Jacob Zuma called on voters to ensure the ANC would garner a two-thirds majority at the polls in the general elections next year to avoid a coalition government with opposition parties and “take the revolution further”.

He was speaking outside the Pietermaritzburg High Court on Friday after the court ruled that his application for a permanent stay of prosecution for his corruption trial would be heard over three days from May 20 next year.

The former president called on the South African black electorate to rally behind the ANC’s policies by voting for the party, and for members of other political formations with similar ideologies to the ANC to do the same.

Zuma said what was important to him was that he was a committed member of the ANC who would continue to campaign and vote for the party.

He said it would be a mistake for ANC members to not vote for the governing party because “there are certain things they do not like”, further explaining the wrongdoings of the party’s members or leaders were committed by individuals and not the organisation.

“The ANC has done nothing wrong. If anyone has done something wrong it is an individual who is a member of the ANC, not the ANC.

“If I have done something wrong, deal with me, do not punish the ANC, which is not guilty of anything. If you say you will not vote for the ANC because you have taken issue with Zuma, you are punishing the ANC which has done nothing wrong.”

The ANC, Zuma said, was the ideal party to vote for because it had better policies than any other political party in South Africa.

He spoke out against voting for individuals because their political careers could never outlive the party, adding it was important to defend the ANC because that was equivalent to defending poor South Africans.

He added that it was important for the ANC to reflect on whether it was still pursuing the eradication of poverty and if it still stood for economic transformation and for the return of land.

”Maybe there are many others who stand for that who are not ANC; maybe we should say we should work together,” the former president said.

He said it was politically illiterate people who had criticised him for calling for black South Africans to unite and work together.

“Who was the country taken from? Was it not taken from black people? Who does not have land in South Africa? Is it not black people?” Zuma questioned.

He said it was not wrong for one to speak about the reality that the majority of black people are poor, do not have control of the economy, are the working class and are unemployed.

He committed that he would be at the ANC’s 107th anniversary celebrations next year in Durban, where President Cyril Ramaphosa is due to deliver the organisation’s January 8 statement.