Hashim Amla – End of a memorable era in cricket

He was a giant of the game, not just in terms of the enormous statistical achievements that flowed so elegantly off his bat, but also in terms of his quiet influence. Hashim Amla will go down as one of the greatest and most humble cricketers of all time. Picture: Getty Images

Hashim Amla was blessed with rare quantities of composure, concentration and patience to go with the sublime skills of timing and placement he possessed as a batsman; but apart from being one of the greatest cricketers to grace the game, he will also be remembered as a tremendous human being.

Unfailingly modest and soft-spoken, his team-mates nevertheless speak of Amla being a tremendous presence in the changeroom; a wise and inspirational figure who also enjoyed being a practical joker at times.

He was a giant of the game, not just in terms of the enormous statistical achievements that flowed so elegantly off his bat, but also in terms of his quiet influence on those around him.

It is no coincidence that when the Proteas enjoyed their greatest era, Amla was at the peak of his powers.

A person of deep faith, even in the toughest of circumstances there would never be a furrow on that placid, content face; The Serene Warrior was perhaps the most apt of his nicknames (there were a few, because he was greatly loved).

With his bald head and luxuriant beard, Amla became an icon and his imitators, Hashim’s Army, were a feature at grounds around the world.

It is sad that the World Cup, where South Africa finished seventh on the log and Amla gathered just 203 runs in seven innings at a strike-rate of 64.85, was his swansong. But there are so many epic memories from the 15 years he spent in the international game.

Anyone who was present during the Proteas tour of India in 2010, or at The Oval in July 2012 or the Waca in Perth in 2012, would have known they were in the presence of greatness.

His technical skills and endurance were on show in 2010 as he scored 490 runs in three innings, spread over nearly 23-and-a-half hours, while being dismissed just once, against mighty India, in India. He set up a crushing victory in Nagpur with his 253 not out and then conquered Eden Gardens with valiant centuries in each innings even as South Africa lost.

Amla has never shown any inclination for celebrating individual successes, however, and even after the remarkable resolve he showed in Kolkata, he didn’t want to talk about himself. 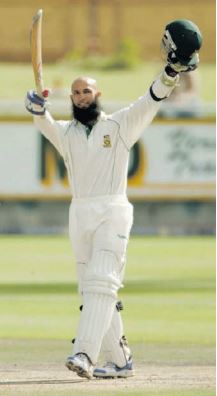 In July 2012, he became the most admired Muslim cricketer in England, well before Mo Ali, as he batted for a bit more than 13 hours to score South Africa’s first Test triple-century; his 311 not out remains the national record.

And it was epic not just because of the sheer scale of his innings, but because it came against the then number one side in the world, against an attack of James Anderson, Stuart Broad and Graeme Swann, and it set up an innings victory in the first Test. It set up a series win that saw SA depose England at the top of the rankings.

His skill and fortitude not in doubt, Amla then blazed a coruscating 196 off just 221 balls against Australia in Perth to show his ability to dominate attacks. South Africa had been bowled out for just 225, but their bowlers, led by Dale Steyn, another all-time great who left the Test arena this week, managed to turn that into a 62-run first-innings lead.

Amla, in the company of his captain Graeme Smith, then produced a couple of hours of batting that overshadowed the famous partnership Barry Richards and Graeme Pollock shared at Kingsmead against Australia in 1970. Amla and Smith added 178 for the second wicket in just 25-and-a-half overs on the second evening; it broke the spirit of the rambunctious Aussies and they crashed to a 309-run defeat, giving South Africa a 1-0 series win.

A born-and-bred Durbanite, those who covered Natal cricket in the late 1990s were soon aware that a highly-rated new talent was coming through the ranks from Durban High School. He made his first-class debut in December 1999 when he was just 16, for a KwaZulu-Natal XI against the England tourists, the same match in which one Kevin Pietersen made his bow.

Pietersen’s choices took him away with the tourists, but Amla scored a century in his first SuperSport Series game in 2002 and rapidly became the new king of Kingsmead.

While the flourish in his backlift was frowned upon and blamed for his failure to immediately settle at Test level, the class was clearly there. Defensively solid, Amla had a lethal ability to ruthlessly dispatch any delivery that was slightly loose.

It was a strength that saw him chosen for ODI cricket in 2008 and he rapidly made that his domain as well.

But statistics is not what he will be remembered for. Instead, he will go down as a sporting genius and one of the nicest people you could hope to meet.