The indictment shows that the State will set out to prove that it was inaction from Smith, as a result of the gratifications paid by Bosasa, rather than his undue influence over others, that resulted in his failure to appropriately perform his duties and hold government officials and Bosasa accountable. 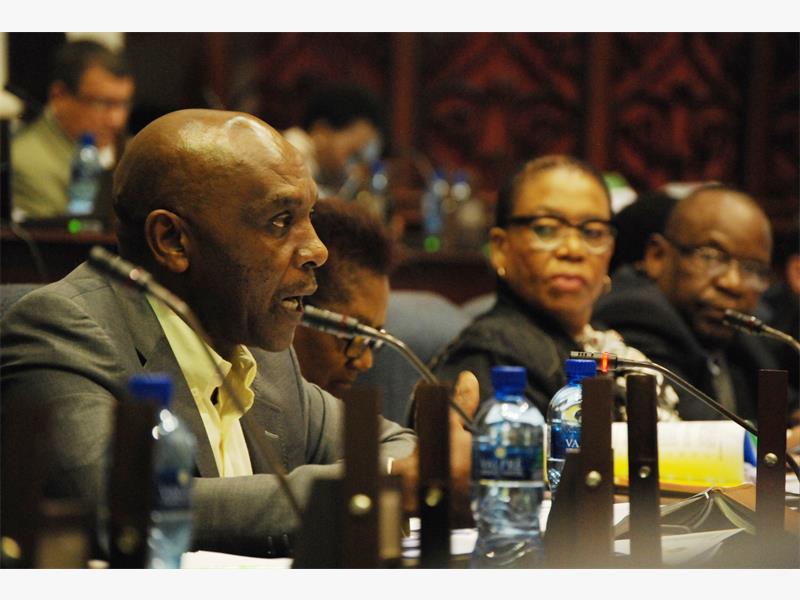 A searing, 39-page indictment by the head of the National Prosecuting Authority’s Investigating Directorate (ID), advocate Hermione Cronje, has laid bare the State’s case against Smith and his co-accused, Angelo Agrizzi.

Agrizzi, the former Bosasa boss-turned-whistleblower, did not appear in court alongside Smith because he was ill, but he was charged with one count of corruption for allegedly facilitating payments totalling R671 000 to Smith’s company, Euro Blitz, in 2015 and 2016.

A further gratification consisted of a CCTV and security system installation at his home in October 2015, worth an estimated R200 000.

Smith was granted bail of R30 000 but maintained his innocence, saying the State would not be able to prove he unjustly influenced any party.

The indictment shows, however, that the State will set out to prove that it was inaction from Smith, as a result of the gratifications paid by Bosasa, rather than his undue influence over others, that resulted in his failure to appropriately perform his duties and hold government officials and Bosasa accountable.

It shows that Agrizzi allegedly made the payments on behalf of or under instruction from Bosasa boss, Gavin Watson, who died in August last year.

While the ID and Cronje have brought other cases before court, notably the attempted recovery of funds from Regiments Capital, this represents their first criminal case against a politician.

It is a notable achievement of the core purpose of the establishment of the ID to collar state capture corruption perpetrators.

“There can be no gainsaying that corruption threatens to fell at the knees virtually everything we hold dear and precious in our hard-won constitutional order,” Cronje writes in the preamble to the indictment, quoting, in part, a judgment by Chief Justice Mogoeng Mogoeng.

“It blatantly undermines the democratic ethos, the institutions of democracy, the rule of law and the foundational values of our nascent constitutional project. It fuels maladministration and public fraudulence and imperils the capacity of the State to fulfil its obligations to respect, protect, promote and fulfil all the rights enshrined in the Bill of Rights.

“When corruption and organised crime flourish, sustainable development and economic growth are stunted. And in turn, the stability and security of society is put at risk,” Cronje continues.

She then sets out the charges.

Smith and Agrizzi face one count of corruption each for the payments and the installation of the security system at Smith’s home in Roodepoort. Smith faces an additional charge of fraud for failing to declare the money and gifts to Parliament, as he was legally obliged to do.

Cronje sets out that in failing to declare, Smith undermined the “position and integrity of the National Assembly (NA)” and prevented the NA from performing its functions adequately.

Cronje sets out that between 2004 and 2006, the Department of Correctional Services (DCS) awarded four contracts to Bosasa worth more than R1 billion and details how Smith’s opposition to and interest in Bosasa’s contracts waned.

This included the supply and installation of televisions, access control and CCTV systems and notably, a contract to provide meals to prisoners across the country.

Former president Thabo Mbeki signed a proclamation for the Special Investigating Unit (SIU) to probe the contracts in 2006, an investigation the SIU finalised by 2009.

Agrizzi, Gillingham, Mti and other Bosasa staff members, namely Andries van Tonder and Frans Vorster, were finally charged with fraud and corruption relating to the 2004 and 2006 contracts last year.

Smith, Cronje states, was initially concerned about the SIU investigation into the tender fraud and “expressed horror” at the findings presented to the Portfolio Committee on Correctional Services (PCCS), which he chaired, by the then-head of the SIU, advocate Willie Hofmeyr.

Smith was present in committee meetings where “it was stated that Bosasa was implicated in the SIU’s report and he committed on behalf of the PCCS to investigate further once the report was finalised”.

“Notwithstanding the SIU recommendations, the contracts between Bosasa and the department continued until the last one of them was cancelled in February 2019,” the indictment reads.

“While the SIU investigation, as well as a number of press reports calling for the government to act against Bosasa, created pressure on parliamentarians to fulfil their oversight role and scrutinise the actions of the DCS, [Smith], despite his initial critical stance towards the DCS and its relationship with Bosasa, did little to hold the DCS accountable for its ongoing relationship with Bosasa,” Cronje sets out.

Smith, she said, showed a marked shift in attitude toward Bosasa during the latter part of the fourth Parliament (2009 to 2014) and throughout the fifth Parliament (2014 to 2019) and did not take up concerns about Bosasa when they were raised by committee members.

In the committee handover report by Dennis Bloem in 2009, he stated that the Bosasa contracts should be treated as a matter of priority by the incoming committee.

Smith chaired the committee between 2009 and 2014 – but his handover report in 2014 addressed none of the concerns relating to DCS outsourcing or any matter of relevance to Bosasa or its related companies.

He is expected to appear before court again on 14 October.