1448 died on SA’s roads during the festive season

Only Mpumalanga recorded an increase in the number of accidents, while the rest of the provinces had declining figures. There were 1448 road fatalities recorded in South Africa during the festive season, from 1210 crashes.

This was revealed by Minister of Transport Fikile Mbalula on Friday, as he released the 2020 festive season road statistics in Eldorado Park.

“Even the R573, better known as Moloto Road, which is notorious for road crashes and fatalities, does not appear in the top 20 of hazardous routes this year,” said Mbalula.

Road accidents were expected to be at their lowest this year, with the country under lockdown. 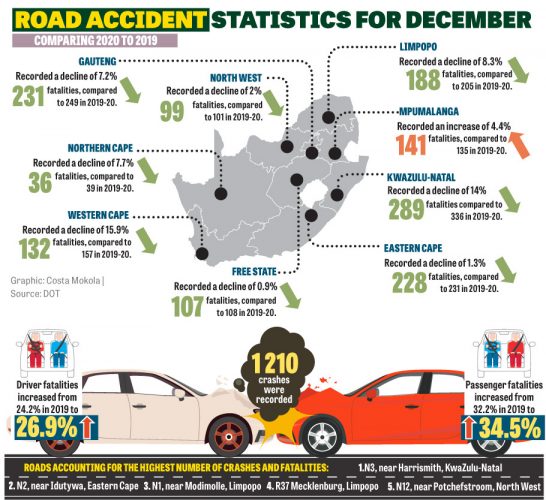 However, Mbalula said there were still many people defying the laws.

“While the numbers demonstrate that the majority of South Africans respected the law and observed the curfew, a few intransigent motorists were on the road when they should not be. As a result, 34.1% of crashes happened during the curfew, between midnight and 6am.”

The breakdown of fatalities per province is as follows:

The following roads accounted for the highest number of crashes and fatalities: