Police use of rubber bullets ‘a crime’, says Amnesty International

Under international law, firing rubber bullets at the face or spraying gas directly at non-threatening protesters is deemed an attack on human dignity. 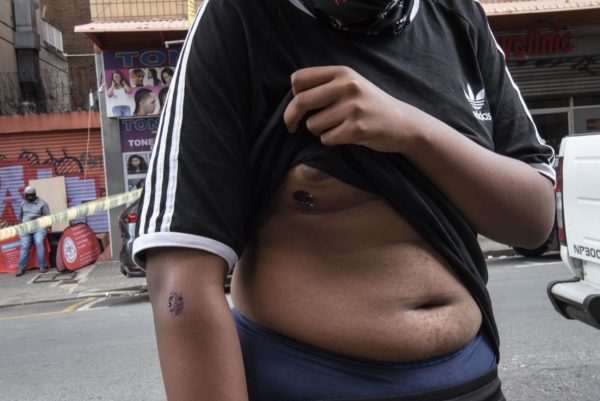 A man shows where he was shot by rubber bullets in Braamfontein, 10 March 2021, when police attempted to disperse protesting Wits University students. Picture: Sibongumenzi Sibiya

The use of less lethal weapons in protests by law enforcement in South Africa is a violation of international law and principles.

This was was the opinion of Amnesty International South Africa on Thursday following the death of 35-year-old Mthokozisi Ntumba.

He was caught in the crossfire and shot with rubber bullets when police tried to disperse protesting Wits students in Braamfontein on Wednesday morning.

International Amnesty SA has since made calls to the government to abolish the use of less lethal weapons, including rubber bullets and stun grenades for crowd control.

“The false impression given is that these so-called ‘less lethal’ weapons cause ‘limited damage’ but we know this is not the case. We have seen it before in this country and saw it again yesterday with the death of a civilian.”

Mohamed said the use of less lethal weapons must be restricted to situations of necessity and in proportion to the associated risks for it to be lawful under international norms.

“Under international law, any use of force by state agents that exceeds what is necessary and proportionate is deemed an attack on human dignity,” explained Mohamed.

The amnesty has since called for accountability.

It said that firing rubber bullets at the face or spraying gas directly at protesters when they did not pose a threat was not acceptable and had no place in any country, especially a constitutional democracy like South Africa.

Last year, following the death of Collin Khosa, Amnesty SA wrote to Minister of Police Bheki Cele and shared with him Amnesty International’s duidelines for the implementation of the UN basic principle on the use of force and firearms by law enforcement.

We are told they went to exile to fight for us? Is this what you went to Lesotho to bring back home Tito Mboweni? #RamaphosaHatesBlackPeople #BlackLivesMatter #Witsasinamali #witsprotest pic.twitter.com/dWQc1H5abj

It expressed concerns about the operational procedures issued on 21 May 2020  which detailed the accountability mechanism for police misconduct.

“Our view is given that Operation Notlela is a law enforcement operation and all criminal misconduct should be investigated by SAPS and, where charges are brought, cases should be heard in civilian courts in accordance with international law and standards,” Mohamed said.