The snake must have hitched a ride in one of the employees car who recently travelled in an area where these snakes are found, as you don't find them anywhere close to Johannesburg. 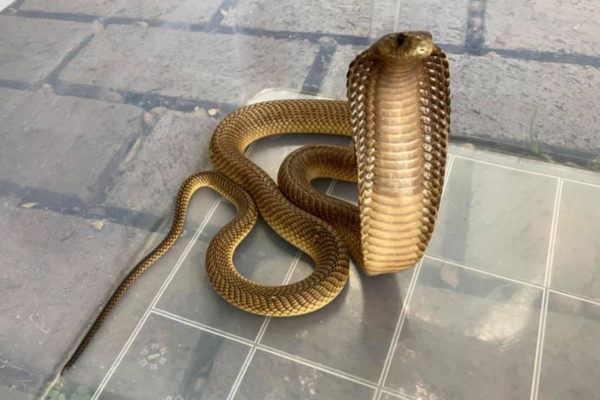 Carla Goede, a volunteer RN at CPResq ComMed got the surprise of her life when she was called to remove a snake from a Northcliff office park on Friday 2 April 2021.

Goede says based on the description they had given her she suspected it was just a Brown House Snake.

She started unpacking the storeroom in the parking lot where the snake was spotted carefully using her hook and torch.

To her surprise, a snouted cobra was staring back at her when she lifted a box – or she thought. She only realised what she was really dealing with when the snake started to slither away. “ I saw a characteristic black tipped tail. This means only one thing: a Cape Cobra,” she wrote on Facebook.

Carla suspects that the snake is probably a hitchhiker that came from a car in the parking lot. “A bunch of employees recently travelled within the Cape Cobra distribution, so it’s impossible to say where it came from.”

Back into the wild?

The Gauteng visitor will not be released back into the wild. “The snake will now be used for venom collection to make antivenom and also for snake handling training purposes,” Goede wrote in her Facebook post.

She lists a number of reasons why the snake won’t be released:

Yesterday I got a call from an office park in Northcliff, 1 km from my…