During a funeral service held at her home in White City Jabavu in Soweto Saturday, various speakers said Gumede was involved 'everywhere' because she always wanted to help. 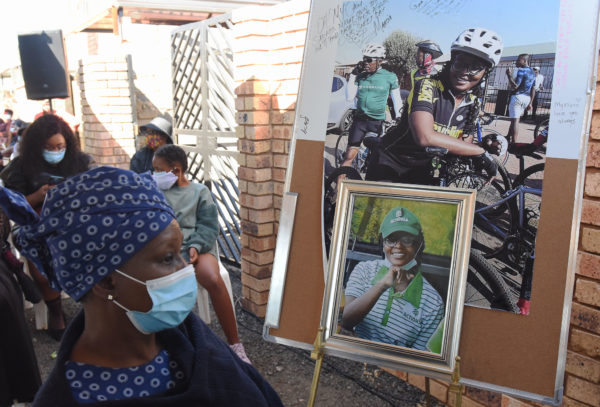 Community and church members, colleagues and fellow bikers paid fond farewell to The Citizen layout designer, Duduzile Gumede and praising her for her hard work in various aspects of her life and always being ready to lend a hand to assist her community.

During a funeral service held at her home in White City Jabavu, Soweto on Saturday, various speakers said Gumede was involved “everywhere” because she always wanted to help and committed to every task she had to do.

Gumede, 40, passed away on 29 March in hospital following a car accident.

She worked at the now-defunct The New Age newspaper from 2010 before moving to The Citizen in 2016, having obtained a diploma in graphic design from Rosebank College. Family members and relatives, work colleagues and speakers from the Action-SA party, Grace Bible Church of which Dudu was a member and the local cycling team that Gumede founded paid tributes to her with songs and words of appreciation for her work.

Speaker after speaker highlighted her involvement in various activities that uplifted people and played immense role in her church and as a budding political activist under the Action-SA party.

She is a founder of the Bhoni 4 Kasi, a cycling club and later introduced its Soweto Night Ride Cycling’ programme, which saw many from the community joining.

She produced an online newsletter for the team and edited their articles and pictures that she published in the newsletter. The club helped to get many youth off the streets and crime and she encouraged community members and her peers to exercise through cycling.

ActionSA, of which Gumede was an active member, said it has lost a dedicated activist and hard worker with great potential as a budding leader.

Senior members of the party including respected politician, John Moodey attended the funeral.

Another speaker was Gumede’s friend and former colleague at the now defunct The New Age newspaper, Itumeleng Mosala, who thanked her for shaping his career and for “always being there for him”.

Mosala, who recently started as a senior reporter at the Star newspaper, urged women to stand up for their rights and emulate Gumede to work hard for the community. Gumede recently completed her BA degree in which she majored in politics and international relations at Wits University. She was expected to graduate at the next Wits graduation session this year.

The Citizen was represented by political editor, Eric Naki, who praised Dudu’s great contribution to the paper.

He described how her death had devastated her colleagues in the paper’s subbing room because she was loved by all at the company.

Naki read a poem authored by The Citizen night editor, Mojalefa Mashego, as a tribute to Gumede:

Did you really have to disappear, so

Could you not stay a little longer

To see more of your many dreams manifest?

Could you not stay a little longer

Could you not stay a little longer?

Much, much, much longer,

To smell the paint in your new house,

To frame your latest qualification,

To realise your political dreams?

Why did you leave, so

Could you not stay a little longer,

To see your son become a man,

And hear him say “Mama I made it”?

Gumede is survived by her son, Kamogelo, her mother and her siblings. She was buried at Avalon cemetery.