Call to arrest those responsible for burning classrooms

The fire allegedly started in one classroom and spread across several rooms. 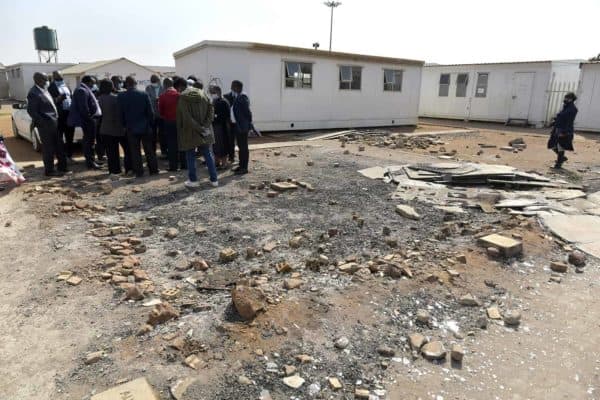 The Portfolio Committee on Basic Education, and the Select Committee on Education, Technology,Sports, Arts and Culture at the sight of burnt down temporary classrooms at Thabotona Primary school in Kathlehong, as they undertook oversight visits to schools affected by the recent public unrest, 12 August 2021. Picture for illustration: Neil McCartney

The Select Committee on Education and Technology, Sports and Arts called on the South African Police Service to leave no stone unturned in their search for the perpetrators involved in the burning of classrooms at Eastern Cape schools.

At Alice’s Jabavu High School, classrooms for Grade 12 Maths and Physics learners, including a school library, science and maths laboratory bathrooms, school’s storeroom and its tuck-shop, were also burnt to ashes.

While the reason for the fire at Mgomazi Junior Secondary School is not yet known, it is reported that homeless people living near Jabavu High School lit a fire on school premises.

The fire allegedly started in one classroom and spread across several classrooms.

Committee Chairperson, Elleck Nchabeleng, said the news of the destroyed classrooms along with the resources inside was saddening and regrettable.

“The loss of that valuable infrastructure and the resources that were there are regrettable and unacceptable especially at a time when there is a call for improvement of the schools in the historically disadvantaged communities,” Nchabeleng said.

Nchabeleng called on school governing bodies and the communities at large to look after schools.

“Schools are the symbols of a country’s future, seeing a destroyed school is heartbreaking and it is like seeing a burnt future of the country,” the chairperson said.