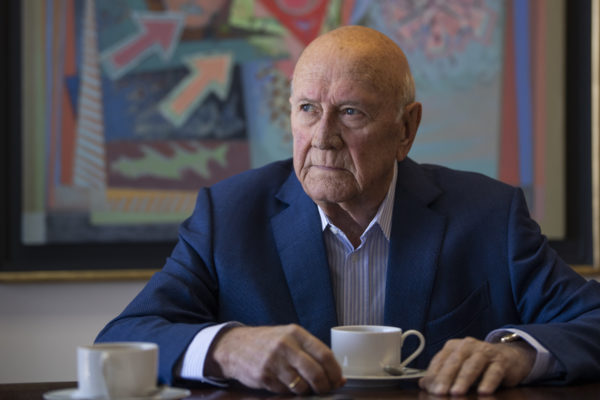 His foundation confirmed his death in a statement which read: “It is with the deepest sadness that the FW de Klerk Foundation must announce that former president FW de Klerk died peacefully at his home in Fresnaye earlier this morning following his struggle against mesothelioma cancer.

“Mr De Klerk was 85 years old. He is survived by his wife Elita, his children Jan and Susan and his grandchildren. The family will, in due course, make an announcement regarding funeral arrangements.”

De Klerk had been earlier this year diagnosed with mesothelioma, which “a cancer that affects the lining of the lungs”.

The former president of apartheid South Africa – from 1989 until 1994 – had been receiving immunotherapy for the illness.

According to SA History, De Klerk was born in Johannesburg, Transvaal (now Gauteng) on 18 March 1936. He grew up in a political family, with both his father and grandfather serving high office.

In 1969 he married Marike Willemse, with whom he had two sons and a daughter.

From 1961-1972, De Klerk practised as an attorney in Vereeniging and played an active part in politics of then-ruling National Party.

In 1982, he became the Transvaal leader of the National Party after Dr Andries Treurnicht quit the party.

After serving in several ministerial positions in the Cabinet of President PW Botha, De Klerk was elected leader of the National Party after Botha fell ill in January 1989.

He was formally elected president by Parliament on 14 September.

On 2 February 1990, De Klerk delivered a speech during an opening session of Parliament in which he announced several reforms.

The former president lifted a 30-year ban on the ANC, the Pan Africanist Congress (PAC), the South African Communist Party (SACP) and other anti-apartheid organisations.

He also announced the release of political prisoners – including Nelson Mandela – as well as the end of the state of emergency and a moratorium on the death penalty.

De Klerk and Mandela worked together for political transformation that ended the nation’s era of white minority rule in 1993.

They both agreed on a timetable for a transition to a non-racial democratic state.

De Klerk, together with Mandela, were joint recipients of the Nobel Peace Prize in December 1993 for their efforts at reform in South Africa.

After the 1994 elections, De Klerk was appointed the second deputy president in Mandela’s Cabinet.

He resigned as deputy president in 1996 and as head of the National Party in 1997, when he announced his retirement from politics.

In 1999, he published his autobiography, The Last Trek – A New Beginning, and established the FW de Klerk Foundation in 2000.

Speaking to the SABC on 2 February 2020, which marked 30 years after Mandela’s release from Victor Verster Prison and the unbanning of political parties, De Klerk said while many were killed during apartheid, more had died due to genocide.

He said he did not “fully” agree with the United Nation’s (UN’s) ruling that apartheid was a crime against humanity.

His remarks sparked a huge backlash and were among the reasons the Economic Freedom Fighters (EFF) disrupted President Cyril Ramaphosa’s Sona speech, demanding that De Klerk be asked to leave Parliament on that night.