Delays at the border post have cost trucking companies R1.3 billion in lost revenue from January 2021 to date. 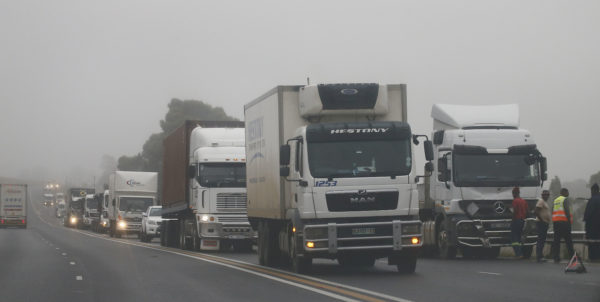 Truck drivers have queued up at the Lebombo/Ressano Garcia border post between South Africa and Mozambique, and they are taking up to three days to cross the border.

The South African Association of Freight Forwarders (SAAFF) and Minerals Council South Africa have called on government to intervene as the crisis at the border post has been ongoing since the beginning of August this year.

According to the organisations, one of the causes behind the delays at the border is the lack of 24-hour operations, which results in crossing times increasing from an average of one hour to more than 20 hours.

Covid restrictions have also exacerbated the situation, as vaccine certificates – the ones issued before 8 October – expire while the truck drivers wait in the queues.

“Transporters confirm that border crossing times are the worst they have experienced in 15 years. The queue of trucks between Komatipoort and Lebombo is frequently between 7km and 15km long.

“This has serious humanitarian consequences, as drivers sit in their trucks for hours at a time when temperatures are above 40 degrees Celsius – without access to food, water or ablution facilities,” SAAFF and the Minerals Council said.

The organisations said delays at the border post had cost trucking companies R1.3 billion in lost revenue from January 2021 to date.

“These delays are resulting in loss of confidence, a loss of business and they are threatening the stability and sustainability of trade, transport, employment and job creation in South Africa.

“Efficient corridors have a significant impact on the competitiveness of local business and regional economies because they provide a measure of predictability, reliability and efficiency central to trade and logistics supply chains – which is key to providing access to markets,” SAAFF CEO Juanita Maree said.

The Lebombo/Ressano Garcia border post is on the Maputo Corridor, which is a major trade corridor which connects Gauteng, Limpopo and Mpumalanga with Mozambique’s capital.

SAAFF and the Minerals Council have proposed that government allow the Lebombo/Ressano Garcia border post to operate on a 24-hour basis, with round-the-clock operations between 6am-10pm daily.

The organisations also suggested that 24-hour operations of traffic policing be reinstated at the border due to Covid-19 restrictions. They also want standard operating procedures (SOPs) for parking facilities on the N4 to be introduced.

“Without [traffic policing], poor driver behaviour seriously compromises the safety of other road users and directly impacts the efficiency of the Corridor.

“No SOPs exist for either facility at the present moment. This opens the door for abuse and inconsistencies which do not serve the intended purpose of these facilities. This must be rectified as soon as possible.”

They further called for the separation of the port-bound transit cargo traffic from general cargo exports.

“The necessary infrastructure adjustments to the exit gate at Lebombo must be made as a matter of urgency. The establishment of a public-private partnership corridor management institution is also urgent.”