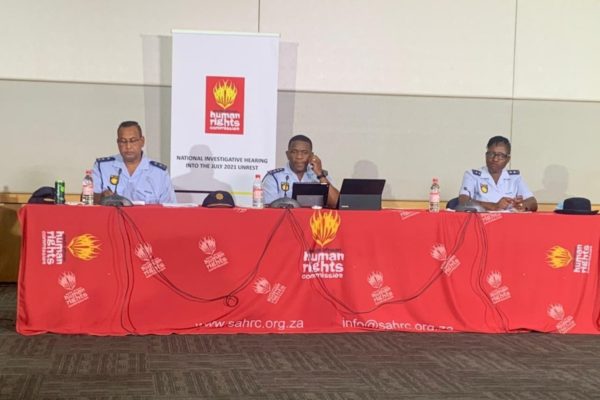 Mapisa-Nqakula had earlier told the inquiry that 800 soldiers were deployed to KwaZulu-Natal to help the police during the riots and looting that had gripped the province.

Mkhwanazi said this was a “blatant lie”.

He claimed that during a meeting with Mapisa-Nqakula on 15 July, he told the minister to stop lying to the public about the deployed soldiers.

Mkhwanazi also accused Mapisa-Nqakula of lying to the SAHRC when she testified that he was uncooperative and withheld information during the meeting.

Mkhwanazi submitted letters to the commission which he claimed showed that the police had communicated with the relevant intelligence structures during the unrest.

The KZN police commissioner also said there was no evidence that police officers watched as Phoenix residents set up barricades and took the law into their own hands.

When questioned about the lack of police action in hotspot areas, such as Phoenix, during the unrest, Mkhwanazi said police could not be held responsible for people deciding to loot, especially with the country’s high levels of poverty and inequality.

Mkhwanazi added that people would not have died if they had stayed home during the unrest rather than taking part in the looting.

NOW READ: Sitole responds to Cele statement that he was ‘nowhere to be seen’ during July unrest