Military to ‘protect economic interest of the country’ over festive season

Minister of Justice and Correctional Services, Ronald Lamola called for "calm and refrain" from all South Africans after Zuma's court ruling on Wednesday. 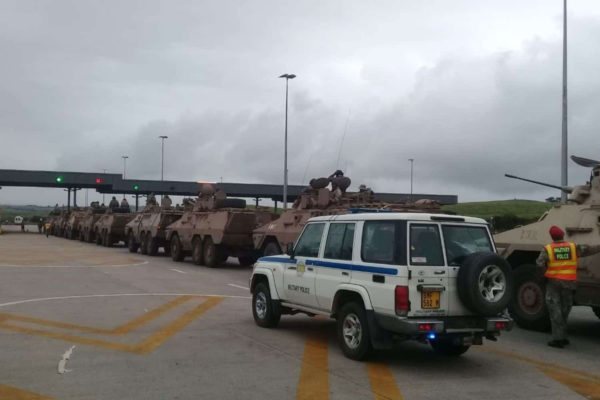 Police Minister Bheki Cele assured South Africans on Thursday morning that the Justice, Crime Prevention and Security (JCPS) Cluster are ready for any eventualities over the festive season period.

Speaking during a media briefing on the state of readiness for the 2021 festive season, Cele said that the police and other law-enforcement agencies will be out in full force this festive season to ensure the safety and security of everyone.

He added that the JCPS Cluster will be working closely with community structures such as community policing forums, civil-society organisations, traditional leaders and faith-based organisations to strengthen crime-prevention measures within communities.

“Our criminal justice system continues to work hard in ensuring that those who violate the laws of the land are made to account and face the full might of the law,” he said.

Addressing concerns over the possibility of another round of violent looting which rocked the country in July this year, after former President Jacob Zuma was imprisoned, Minister of Defence & Military Veterans, Thandi Modise said that they [the military] have been in discussion with the Police Minister, and [defence] have agreed to take over just the toll roads and the toll gates specifically.

“That decision was taken because we cannot afford a situation as a country where trucks block very strategic economic routes, which not only affects South Africa, but the whole of Sadc,” she said.

She added that it is still unclear whether the SA National Defence Force (SANDF) will only be deployed for the December period, but that they [defence] won’t hesitate to get involved should any situation arise to create uncertainty over the safety of life and limb, property and the economic interest of the country.

“We will not hesitate if we are approached to be on standby, but we have not decided to be on standby simply because there is a court ruling. We are on standby because we have been observing a trend where trucks keep on hindering the free movement of innocent South Africans and affecting the standing of this country,” she said.

Modise is referring to the court ruling earlier this week when Zuma was ordered to return to jail to serve out the remainder of his 15-month sentence imposed by the Constitutional Court (ConCourt) in late June for refusing to obey court orders to appear before the Commission of Inquiry into Allegations of State Capture.

Cele said that they have met with the management and leadership of the South African Police and defence to make the preparations so that the responses and reactions are much better this time. He added that these preparations were not only in light of the announcement made on Wednesday, referring to the court ruling ordering Zuma back to jail, but that it is the festive season and that police visibility is always high during this time of year.

Cele also said that while they are extra cautious and agile at this time, it is their responsibility to protect the nation and people together with their property and that is exactly what all the law enforcement agencies have been instructed to do.

Meanwhile Minister of Justice and Correctional Services, Ronald Lamola called for “calm and refrain” from all South Africans after Zuma’s court ruling on Wednesday. “It is important that we allow the due processes of the law to take its course,” he said.