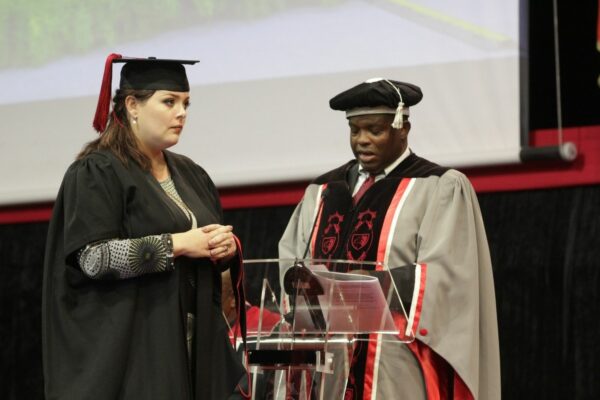 Nicoleen Moorcroft defied the odds by obtaining her third qualification in ailing conditions.

Nicoleen Moorcroft obtained an LLB degree with distinction during the April 2022 graduations, and she is also a Senior Officer in the Office of the Rector and Vice-Chancellor, Prof Francis Petersen at the University of Free State (UFS).

Amid her studies, Nicoleen stumbled upon hardships after being diagnosed with Arnold-Chiari malformation– a condition in which brain tissue extends into the spinal canal.

It occurs when part of the skull is abnormally small or misshapen, and the treatment may involve monitoring and surgery.

This resulted to her to stop with her studies.

She said she underwent Chiari decompression surgery in 2016 to relieve the pressure on her brain. She stated that this significantly improved her health and mental capabilities.

During this life-changing moment, she then got married and gave birth to a daughter.

Juggling work and studies, amongst other things such as being a mother and a wife, Moorcroft worked tirelessly to collectively fulfill her roles.

“Having learnt the value of time management early in my life, this invaluable skill also helped when balancing work, studies, and personal responsibilities.  I was also incredibly lucky to have an exceptionally supportive and understanding team in the office – without their constant support and encouragement; I might not have been able to make it,” Nicoleen told UFS.

She also had to accept studying as a complete lifestyle change, rather than just something I do in my spare time.

Her responsibilities as the senior officer include; planning, coordinating, and managing specific institutional projects, initiatives, and functions under the direction and leadership of Prof Petersen.

Though she is delighted to have completed her studies, Nicoleen says she still has a “massive passion for continuous learning and is looking forward to finding ways to improve on the impact I make as an employee of the UFS.”