The accused had brought an application to be discharged. 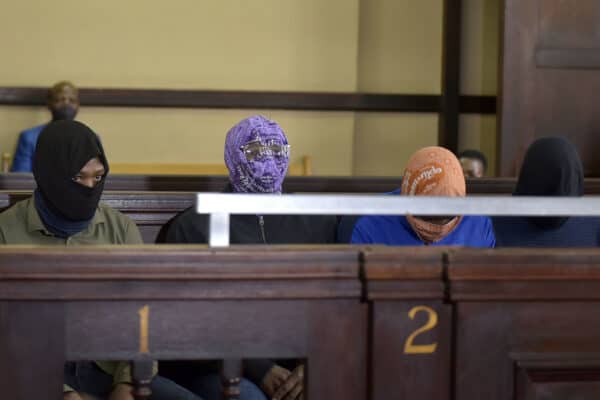 The police officers that were arrested in connection with the death of Mthokozisi Ntumba at the Johannesburg Magistrate's Court on 17 March 2021. Picture: Neil McCartney

The National Prosecuting Authority (NPA) says it will look into whether there are grounds to appeal the acquittal of the four police officers accused of killing Mthokozisi Ntumba.

On Tuesday, Tshepiso Kekana, Motseothata Boitumelo, Madimeja Lekgodi and Victor Nkosinathi Mohammed saw the charges of murder, attempted murder and defeating the ends of justice against them dropped by the Johannesburg High Court.

The accused had brought an application in terms of Section 174 of the Criminal Procedure Act to be discharged.

Delivering his judgment, Acting Judge Mawabo Malangeni ruled that there was no credible evidence linking the four accused, who had pleaded not guilty in January, to the fatal shooting of Ntumba.

“In these proceedings, there is no direct evidence in the form of eyewitness or witnesses, I mean to say that there is no person to say he or she saw the accused persons or any of them committing the offences in question. The state’s case is premised from circumstantial evidence, being the video footage,” the judge said.

The NPA has since said it would study the judgment before deciding on a way forward.

“As the NPA, we accept the court’s decision, but then we will go and apply our minds in studying the judgment to determine whether or not there is a need to take the judgment on review,” Gauteng NPA spokesperson Phindi Mjonondwane told SABC News.

Mjonondwane also explained why the state brought its case against only the four officers rather than all 21 officers who were at the scene on the day Ntumba died.

“Remember when charges are drafted, they drafted following the sequence of events and the evidential material that is contained in the docket.

“So if the evidential material points to the fact that there is a prima facie case against only the four accused persons then that’s what the prosecution does,” she said.

“But in terms of preparing for the case, we have done our best as the prosecution in bringing witnesses before the court.

“Unfortunately, that’s how justice works, so as the court has pointed out that the prosecution has failed to bring sufficient evidence that the accused may have committed the offence that they were charged with or evidence that a reasonable court acting carefully may convict the accused on any other offence the accused have a right to bring an application to be discharged. This is what happened in this instance,” Mjonondwane added.

Ntumba, who was a bystander, was killed during the protests over historical debt outside Wits University in Braamfontein on 10 March 2021.

The 35-year-old had just come out of a doctor’s office when he was shot with a rubber bullet as the officers tried to disperse the protesting students.

Magistrate Sipho Sibanyoni had previously granted the four accused in the case R8,000 bail each shortly after their arrest.

Sibanyoni at the time said there was no evidence produced in court that proved that the suspects were flight risks.

During the bail application, the Independent Police Investigative Directorate (Ipid) revealed that the officers left the scene without helping the dying Ntumba.

Ipid investigating officer, Judy Thwala, told the court the accused got into the Nyala and drove away even after an eyewitness alerted them of the injured Ntumba.

READ MORE: Wits protests aftermath: the rifle, the artist and the students

The police watchdog’s affidavit further indicated that Ntumba was shot and killed with a rubber bullet at close range, approximately 4 metres.

Thwala stated upon arrival at the scene, she found the deceased lying on the pavement with three bullet wounds.

The officers also ignored the possibility of serious injury or death by shooting at close range and without warning the non-violent students, according to Ipid.

The officers were part of the Public Order Policing (POP) unit.