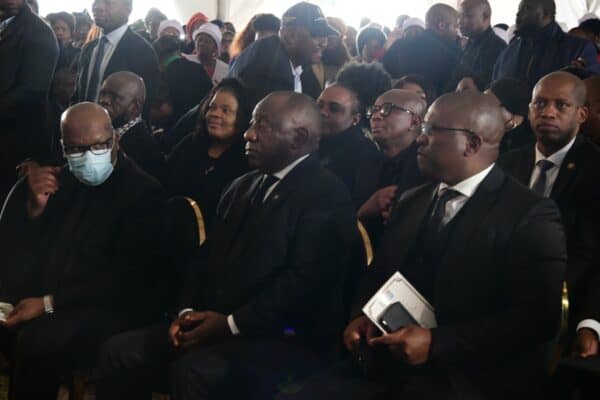 Ramaphosa made this plea while delivering his eulogy at the mass funeral service held for the 21 teenagers who tragically died in the Enyobeni tavern recently.

Ramaphosa said the law is clear and that alcohol may not be sold or served to anyone under the age of 18.

“Owners of establishments that are permitted to sell alcohol have to ensure that anyone they sell alcohol to is over the age of 18 by asking for IDs.

“Many young people under the age of 18 were drinking alcohol that had been sold to them. The youngest child who died in this tragedy was just 13 years old,” Ramaphosa said.

ALSO READ: ‘It wasn’t my intention for this to happen’: Enyobeni tavern owner

Ramaphosa further said when young people abuse alcohol, they end up missing school and as a result, they end up falling behind in their learning.

He said the country has extensive laws to address and combat substance and alcohol abuse, but that the problems lies with the implementation thereof.

Meanwhile a similar tragedy happened in Khayelitsha a few years ago, where eight young women died.

“There was the Throb nightclub disaster in Durban in 2000, where 13 children died and 100 were injured.

“What is common to all of these is that they were selling and serving alcohol to under-age patrons, in violation of the law,” Ramaphosa remarked.

He added: “These are the lives we have lost. They are not just bodies and souls.”

Dignitaries from government including ministers, members of parliament and members of legislatures also attended the funeral service. Among them in attendance, was the minister of police, Bheki Cele.