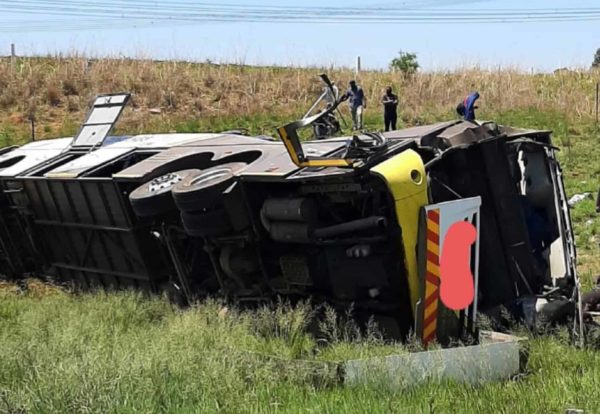 At least nine people have died after a horrific bus crash on the N3 near the Tugela River in KZN. Picture: @_ArriveAlive/Twitter

At least nine people have died after a horrific bus crash on the N3 near the Tugela River in KwaZulu-Natal on Tuesday morning.

According to Arrive Alive, the nine fatalities were four males and five females, including a baby.

More than 50 people were treated by paramedics on the scene and transported to hospital.

Earlier, Netcare 911 spokesperson Shaun Herbst confirmed to eNCA that multiple passengers sustained injuries ranging from moderate to severe and have been transported to hospital.

“The initial reports from the scene indicate that the bus was traveling in a north-bound direction when the driver passed the barrier and then lost control of the vehicle and went into the south bound lane.

“The bus then rolled several times ejecting some of the occupants in the process,” Herbst said.

“Reports from the scene are that a bus has left the highway and crashed into the adjacent bush. Paramedics are treating multiple patients at the scene and there are reports of multiple fatalities as well,” Mackenzie said.