Cekeshe's application to appeal his conviction and be granted bail was dismissed in the Johannesburg Magistrate's Court on Monday. 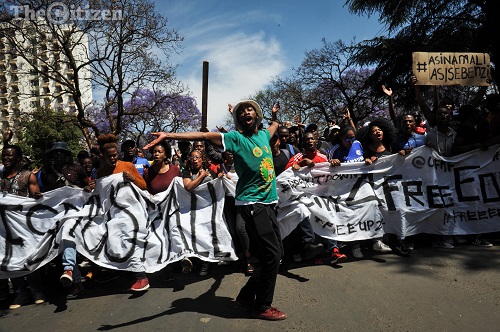 The EFF says it will go to the highest courts to fight for the release of #FeesMustFall student activist Kanya Cekeshe.

The party said this after the student’s application to appeal his conviction and be granted bail was dismissed in the Johannesburg Magistrate’s Court on Monday.

Cekeshe, believed to be one of the last #FeesMustFall student activists still in prison, was convicted of public violence and malicious damage to property when he tried to set a police van alight during protests in 2016.

EFF spokesperson Mbuyiseni Ndlozi told News24 the party would fight for his release “until the end”, adding the next stage was to take the matter to the High Court.

“A fair trial is at the core of the administration of justice. You cannot possibly argue that at any point or given time that you are administering justice if your trials are not fair,” Ndlozi said.

He added any “objective” observer would conclude that Cekeshe was not given adequate legal representation during the trial.

He said there were discrepancies in the allegations in the charge sheet and admissions made.

Magistrate Theunis Carstens, while handing down judgment, said Cekeshe admitted to all the allegations that were levelled against him.

He said the arguments made by the defence were “opportunistic”.

“It is crystal clear that the applicant admitted all the relevant allegations in the charge sheet. In so far as the admissions made by the applicant are concerned, there is no merit in any of the arguments put forward by defence counsel,” said Carstens.

Ndlozi, however, said the magistrate should have dealt with the “facts” submitted by Cekeshe’s defence, that his previous legal representative had not explained what admissions meant.

‘We want Kanya to come out’

He described Cekeshe as a “desperation a young man” who did not understand that an eight-year sentence was a serious decision.

Ndlozi said the facts were not explained to him, adding there were “many young men and women in jail because of that particular problem”.

He said they were hoping, however, that higher courts would arrive at a different verdict and grant Cekeshe leave to appeal his conviction.

Cekeshe’s family struggled to hold back their tears when they learned their relative would remain behind bars.

His uncle, Mnikelo Madala, told a group of EFF student command members, who had gathered outside the court, that they would continue to fight for his release.

EFF student command president Mandla Shikwambana said the government had failed them, adding that they were now going go to the streets to fight for Cekeshe’s release.

“We are subjected to another struggle where we have to go and fight, physically so, for Kanya to be released because there is no more options left for us [as young people of South Africa].

“We want Kanya to come out and further his studies and be with his family,” Shikwambana said.