The mother of twin boys who were allegedly abused by former school counsellor Darren Goddard was called to the stand to testify on what lead her to open a case against him. 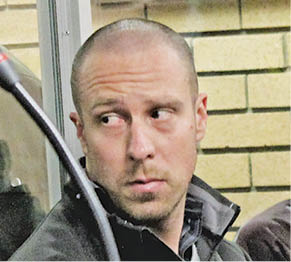 Darren Goddard, a former Pietermaritzburg school counsellor, is facing a host of charges including being in possession of child pornography, and multiple charges of sexual assault on minors.

Darren Goddard, a former school counsellor, is accused of paedophilia and is currently facing 15 charges, including accessing and being in possession of child pornography and multiple charges of sexual assault on minors.

Testifying in the Pietermaritzburg High Court on Wednesday morning, the mother told the court she had initially trusted Goddard and been blown away by his care and concern towards her twin sons, reports Maritzburg Sun.

She said her twins had been moved to the school where Goddard was employed as a counsellor in 2014 to repeat their Grade 1 year.

A few months into the year, Goddard had contacted her expressing his concern over her two sons repeating the grade in a new school environment. He offered to “keep an eye on them,” to which the mother gratefully agreed to.

“I was very impressed. I had never had a school counsellor contact me and show such concern for my children,” the mother said. She noted that the first three months of their school year in 2015 were “positive” and the boys enjoyed going to school.

Three or four months into the school year, she began to realise from conversations with her sons that Goddard had been counselling them regularly, and that they enjoyed his counselling sessions.

However, as the year progressed, they started failing all their tests and exams. She said this was concerning as, although they were repeating Grade 1, they had passed their subjects the year before, but now they were “outright failing.”

The one son also started to develop anxiety, which he had not experienced previously, and started to wet his pants both at school and at home.

“My two boys, who were once friendly and happy, became withdrawn,” the mother recalled.

When she raised concerns about her sons’ bad grades, Goddard said her children “would never amount to much academically”.

“As any parent would, we did not accept that, and continued to look for answers, especially because our sons had passed previously,” she explained.

Dr Madekurozwa told the mother her son had signs of “blunt penetration” that was suspicious of sexual abuse.

“It was not so much about what she said, but the shock on her face,” the mother recalled.

She said she was mortified and emotional. Her husband opted for a second opinion, so they went directly to their general practitioner, who said there was no sign of abuse.

“We felt so relieved,” she recalled, confirming that they did not accept Dr Madekurozwa’s findings. At the beginning of June 2016, the mother received an email from Goddard saying that her son was improving and he was planning on “weaning him off of the counselling”.

“I was confused, because my child had definitely not improved at all,” she said. Shortly after that, she received a call from Colonel Bezuidenhout from the Child Protection Unit requesting her to meet with her.

Bezuidenhout informed her of an investigation of paedophilia on Goddard. The mother said she was horrified and did not believe it.

Despite refuting the claims, she was a bit “fearful and worried” and apprehensive of them continuing counselling, just to be safe. Every day she asked her sons if they had seen Goddard that day. She testified that one day, while driving, she posed the question and her one son lashed out at her and angrily responded: “Why have you got the hots for Mr Goddard? He’s gay.”

When she questioned how he knew, he told her: “Everyone knows that he touches all the boys’ willies.” She said the other twin added that: “Goddard confuses my willie.”

While the one son refused to say more, the other started slowly opening up and disclosing more details of the abuse, even requesting pen and paper to “write down the things that were done to him that made him sad”.

“My husband and I were so shocked that the person we trusted had done this to our sons,” she said.

In Goddard’s plea, he alleges the one twin was “prone to lying”, which the mother strongly denied.
The mother testified that three years later, her sons were thriving at another school.

“They are currently in Grade 6 and their academic performance has superseded my expectations,” she said.

The trial resumes on Thursday for cross-examination.