Judge Natvarlal Ranchod postponed the matter to allow the applicants, the City and home affairs to come up with a draft order. 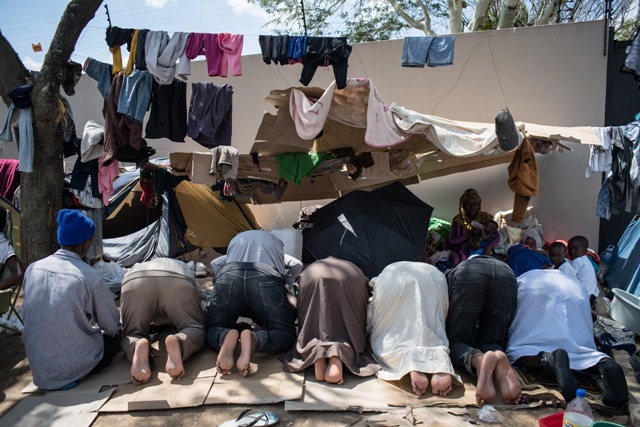 Muslim refugees can be seen praying along the road where some of the 620 Refugees from various African countries have been camping outside the UNHCR offices in Waterkloof Pretoria for 4 weeks, demanding the United Nations move them to a safer country due to threats of xenophobic violence, 4 November 2019. Picture: Jacques Nelles

“The only thing that remains is death because we know, if we go to the community, we will die like dogs.”

These are words of refugees, who are staging a sit-in outside the United Nations High Commissioner for Refugees’ (UNHCR) offices in Pretoria.

Refugees were pre-empting the outcome of an urgent application to remove them, that was heard in the Gauteng High Court in Pretoria on Tuesday.

News24 previously reported that home associations from two upmarket suburbs, where the UNHCR offices are situated, have approached the court seeking to prohibit the refugees from staging a sit-in protest.

They are also asking that the court compel law enforcement to deal with the refugees for contraventions of the municipal by-laws and that the Department of Home Affairs identifies the refugees and their status in the country.

Advocate Thys Strydom for the Waterkloof Homeowners’ Association and Brooklyn and Eastern Areas Citizens’ Association told the court that the refugees were disregarding the rights of other people and that they had also contravened a number of laws while staging their protest that started at the beginning of October.

“Even if you are an asylum seeker or refugee you have to abide by the law of this country. If they are creating a nuisance to others in the way they are protesting, they should be stopped and interdicted from doing so,” Strydom said.

“These people are acting against the laws and to the detriment of others.”

Strydom said that his clients had no issue with the protest, but said they should be done within the parameters of the law.

The applicants cited the Minister of Police, Minister of Home Affairs, the City of Tshwane and Brooklyn police station as respondents in the urgent applicant.

The only respondent that opposed the application was the City, while home affairs and the police indicated that they would comply with the court order.

The City, which did not dispute the facts in the matter, argued that issues relating to foreign nationals be dealt with at a political and diplomatic level before law enforcement agencies intervened.

The City further conceded that it had a mandate to enforce by-laws, but that such by-laws would be inoperative in as far as they are in conflict with national legislation pertaining to refugees, asylum seekers and illegal immigrants.

Advocate Adriaan Vorster, for the City, said they would comply with whatever order the court imposes, but argued that the responsibility in this matter should lay squarely with home affairs.

Judge Natvarlal Ranchod postponed the matter, to allow the applicants, the City and home affairs to come up with a draft order that will speak to the responsibilities to be carried out by each respondent in the matter.

He also urged them to cooperate and deal with this matter constructively.

The application is expected to resume on Wednesday.

Democratic Republic of Congo national Aline Bukuru, who has been a refugee in South Africa for the past 12 years, said they were prepared for the worst possible order by the court.

“We know the court is not here to protect refugees, so we are ready for anything. This happened in Cape Town already,” Bukuru said, referring to refugees who were removed from UNHCR offices in Cape Town following a court order.

Bukuru said that if the order was granted, prohibiting them from a sit-in protest, police would have to forcibly remove them, as they had nowhere else to go.

She said she understood the frustrations by residents in the area, but that refugees had been left with no choice.

Democratic Republic of Congo national Mongo Alex, who has been in South Africa since 2008, agreed with Bukuru.