The principal of Sea Point High School even cut down on sport so that pupils could leave early for their own safety. 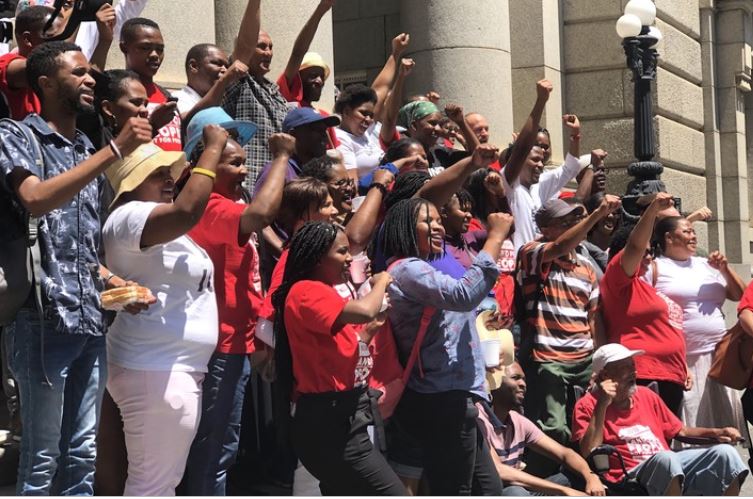 Supporters of Reclaim the City and Ndifuna Ukwazi chant on the steps of the Western Cape High Court in Cape Town, 26 November 2019. Picture: Madison Yauger

Two-and-a-half hours to travel home in heavy traffic, too tired to do homework and scared of being involved in a crash on the way from the Cape Flats to a school in central Cape Town are some of the fears many pupils have to deal with every day.

This is according to a submission from Equal Education (EE) as a friend of the court in a massive challenge over the Western Cape government’s decision to sell a large property in Sea Point to a private Jewish day school instead of building social housing there.

Social activists Reclaim the City and Ndifuna Ukwazi are challenging the Western Cape government’s decision to sell prime property in Sea Point, known as Tafelberg, for the establishment of the Phyllis Jowell Jewish Day School.

The properties on the two erven concerned are Wyngard Mansions and Tafelberg Remedial High School which social activists think will be perfect for much-needed social housing for people who earn between R1,500 and R15,000 per month.

The social activists argued the decision by the Western Cape government to go ahead with the sale for the private school was against local, provincial and national constitutional obligations to redress apartheid spatial planning and provide social housing.

According to advocate Janice Bleazard, for EE, schools in suburbs like Sea Point, which has better socio-economic circumstances, tended to produce better results than those in, for example, Khayelitsha – one of Cape Town’s top 10 gang-infested areas.

For these reasons, children will travel long distances to schools in or close to the inner city in a bid to get a better education.

But the price they pay for it is to wake up early for a one-and-a-half hour journey to one of the schools they have managed to get into.

Because they rely on public transport, the children will miss school if there is a strike; they are late if there is an accident or they simply stay out of school if they do not have up to R1,000 that it cost to get to these schools.

Bleazard said living so far from their schools had negative impacts on their friendships and family relationships because they have so little time for this after travel, homework and chores.

She added the principals in schools they have questioned in areas such as Mowbray, Sea Point and Walmer Estate, indicated over 90% of the pupils at the schools they sampled came from outside the area, and they came for a better education.

The principal of Sea Point High School even cut down on sport so that pupils could leave early for their own safety.

Bleazard said in Sea Point, in particular, security guards, domestic workers and carers were separated from their children if they have to live-in for work.

It is not unusual for children to be hidden from an employer if parent and child want to live together and often the room they are living in, with the child hiding, is not in a good condition.

Bleazard said all of this was included in the submissions to the Western Cape government when it sought comment on the R135m sale of the Tafelberg site. However, these issues do not get a mention in the reams of documents the province prepared for the court challenge.

She added the Western Cape government, during the court processes, rather focused on the government’s education spending priorities.

Bleazard was about to hand over to the next lawyer making submissions in the case when Judge Monde Samela, who is presiding with Judge Pat Gamble, stopped her to comment on the children’s and working parents’ situations.

But Eduard Fagan SC, for the provincial government, said it spent up to 70% of its budget on health and education, with 30% left for “everything else”.

One way of raising money is by selling assets.

It wanted to sell Tafelberg for R135m – which was above market value – to buy the education department its own building so that it would not have to pay to lease offices anymore.

This would apparently save R40m a year.

“So financially, it would be a no-brainer,” submitted Fagan.

Fagan said that by selling the land to the Phyllis Jowell Jewish Day School, the site would still be used for education.

He questioned the right of people to demand social housing specifically in central Cape Town while supplying figures on social housing already built in the Belhar CBD.

“There is more than one CBD.”

He said due to the costs of building in the Cape Town CBD, the government had to decide whether to build for 100 people in the CBD, or 10,000 elsewhere.