The allegations include that Mkhwebane acted with bias in the pursuit of a political objective, abused state resources for her own ends, and acted unethically. 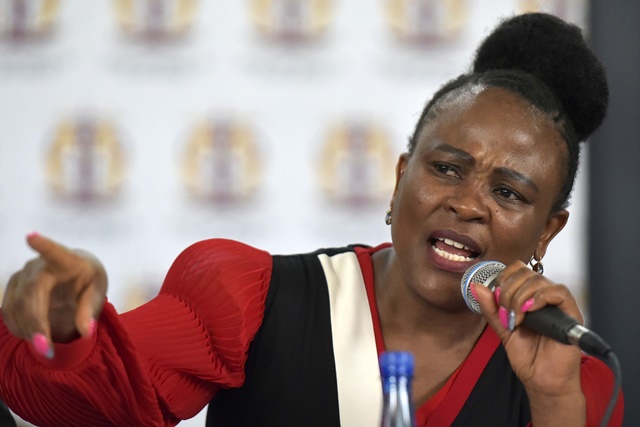 Baloyi has taken both Mkhwebane and Public Protector CEO Vusi Mahlangu to court over her axing, which she said was part of a purge.

She also wants the court to declare that Mkhwebane had acted unconstitutionally, violating her obligations towards independence.

Advocate Daily Mpofu, on behalf of Mkhwebane, argued Baloyi’s work was not up to scratch which resulted in her dismissal.

Baloyi, who was on probation before she was dismissed, said no major concerns had been raised with her regarding her performance.

Mpofu, however, said there was “serious dissatisfaction” with her performance.

He argued he could not see the connection between Baloyi’s allegations and the labour dispute.

“Let’s assume all these bad things happened … this, that and the other one, what has this got to do with what has brought us here today?

“There is no connection whatsoever with all this very interesting tales and stories,” Mpofu said.

He added Baloyi had not exhausted internal remedies before approaching the court.

Her lawyer, Tembeka Ngcukaitobi, argued she had been dismissed as a result of resisting Mahlangu’s interference in the Prasa investigation, which Mpofu said was never pleaded in her papers.

Mpofu added the case had no urgency “whatsoever”, saying Baloyi could have taken these concerns forward back in April.

He maintained the case should be heard in a labour court and not the High Court because it was essentially a labour dispute.

Ngcukaitobi said the allegations were triggered by the dispute, however, and maintained Mkhwebane had an ulterior motive in axing Baloyi.

The allegations include that Mkhwebane acted with bias in the pursuit of a political objective, she abused state resources for her own ends, she made false claims about the extent of Mahlangu’s interference in investigations, and acted unethically in the manner in which she handled investigations.

“In summary, there is a direct complaint that the incumbent is abusing the Office of the Public Protector,” Ngcukaitobi said.

“She is acting unethically [and] is eroding the moral authority of the Office of the Public Protector.

“If one bears in mind the constitutional significance of the Office of the Public Protector, it goes without saying that it is … urgent that this court intervene to stop the abuse of power by advocate Mkhwebane.

“If she is not stopped, the situation will escalate and it will get worse not better.”

Ngcukaitobi maintained they were not asking the court to remove Mkhwebane from office, as that power only lies with parliament, adding they were asking it for a judicial declaration that she had acted unconstitutionally.