Former top cop, three others back in court as Marikana murder trial resumes

The four are facing charges of defeating and obstructing the ends of justice. 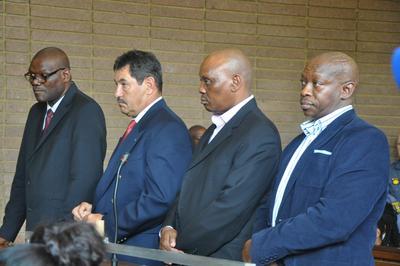 In a statement on Tuesday, National Prosecuting Authority (NPA) spokesperson Henry Mamothame said the state and the defense team are expected to make closing arguments before the matter goes for judgement.

The four are facing charges of defeating and obstructing the ends of justice.

They allegedly concealed information on circumstances surrounding the death of Modisaotsile Sagalala, who died in a police canter when striking miners participated in a wage strike on 16 August 2012.

“It is alleged they were shot by police following confrontation. It is also alleged that Sagalala, who had a gunshot wound on the chest and handcuffs at the back, died in a police canter following his arrest with other miners.

“His lifeless body was subsequently discovered at the temporary detention center that was set by the police in the Lonmin mines premises, referred to as the Hub, when miners were offloaded to be processed,” Mamothame said.

Mamothame further said that police allegedly passed off Sagalala’s body as if he had died in hospital although the body was reportedly to have been certified dead by paramedics at the hub.

“General Mzondase Mpembe and three other senior police officers failed to report this matter to the Independent Police Investigative Directorate (IPID) and they misrepresented facts at the Farlam Commission which was set to establish truths surrounding the deaths of miners during the strike,” he added.