Defence applies for disclosure of docket in Mkhondo murder case

The eight men applied for bail before Magistrate Dumisani Nxumalo in the Piet Retief Magistrate's Court this week. 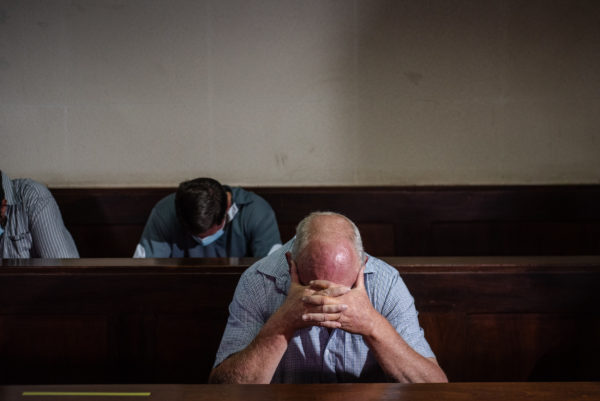 Some of the five accused appearing in the Piet Retief Magistrates court during their bail hearing in the case where the Coka brothers were shot and killed, 19 April 2021, Mkhondo, Mpumalanga. Picture: Jacques Nelles

The State has opposed the bail of eight men arrested in connection with the murder of two people on Pampoenkraal Farm outside eMkhondo, Mpumalanga, in August last year.

The group were accused of assaulting brothers, Sifiso and Christopher Thwala, and Musa Nene on 9 August last year.

The three had been accused of stealing sheep on the farm.

The court heard during the bail application that the victims’ red sedan had tyre problems while they were on their way to Driefontein from Derkiesdorp, around 20:30.

They had been parked on the side of the road when they were attacked.

The investigating officer, Warrant Officer Vukile David Nhlapho, told the court on Thursday that Christopher, the only witness of the alleged assault, had informed him that they were assaulted for 30 minutes.

The court also heard that, according to Christopher, they had been hit with a sjambok, slapped, kicked and choked to the point where they could no longer respond.

Nhlapho said he was strongly against the accused’s release on bail because it would put witnesses in danger.

He added that the farming community had also indicated that it was the first time that such arrests had been made in the area, and that they felt “safe” following the arrests.

“I am more concerned about the safety of the witnesses. The witnesses fear for their lives [and] I have also interacted with the members of the farming community… I strongly oppose [their release on bail],” the police officer said.

Nhlapho said he was not confident that the men would be traceable if released on bail.

He added that this was because some of them, including Yende, had tried to escape when they were arrested.

According to his understanding, the officer said investigations were complete. The matter had been sent to the National Director of Public Prosecutions.

The only outstanding issue was a hospital report, which he said he would get in the coming weeks.

But advocate Jaap Cilliers SC, representing Yende, Potgieter and Eliot Dlamini, questioned the officer about not correctly testifying in court during his initial cross-examination.

He questioned why the officer, whose testimony in the bail court relied on witness statements, did not include certain aspects from the statements.

The defence lawyer believed there were discrepancies in these statements.

“All we have to rely on is the summary of this witness as to what he then deemed important to tell the court,” Cilliers said.

He added that this would prejudice the accused.

Cilliers applied for the disclosure of the docket, as well as the statements.

Nhlapho explained to the court that he had testified on what he thought was “important”, but Cilliers said the excluded aspects might have also been “important to the defence”.

Applying for bail, the accused informed the court that the victims were driving a “suspicious vehicle”. They said two sheep were allegedly found in the boot of their vehicle when it was searched.

Nhlapho relied on two witness statements, one from the surviving victim and the other from a guard who was present when the alleged assaults happened.

But according to one of the witnesses, Potgieter instructed that the two sheep be placed in the boot. The court heard that when the accused searched the victims’ vehicle, they couldn’t find anything but ropes and spanners in the boot.

Nhlapho said: “Applicant 2 [Potgieter] gave an instruction that the witness, Msibi, Zenzele Coka and Mchunu, to get into the back of the bakkie, and they drove to where the sheep were. They were instructed to run and find two sheep.”

The accused allegedly later drove the victims to Potgieter’s yard, where they continued assaulting them.

Two of the victims were found dead the morning of 10 August. The accused said they were unaware of how the men had died.

It was revealed in court that two people, both named Zenzele Coka, had worked at the farm.

On the night of the alleged attack, a Zenzele Coka, but not the one who died with his brother at the same farm following an altercation, was on duty guarding livestock.

The said Coka was among the group who had responded to the alleged “suspicious vehicle”.

Yende, Potgieter and Greyling are already out on R10 000 bail for the alleged murder of the Coka brothers on the same farm in April, when they were arrested last week.

The bail hearing continues on 10 and 11 June.