Zuma was admitted to a hospital outside the Estcourt Correctional Centre on Friday for medical observation. 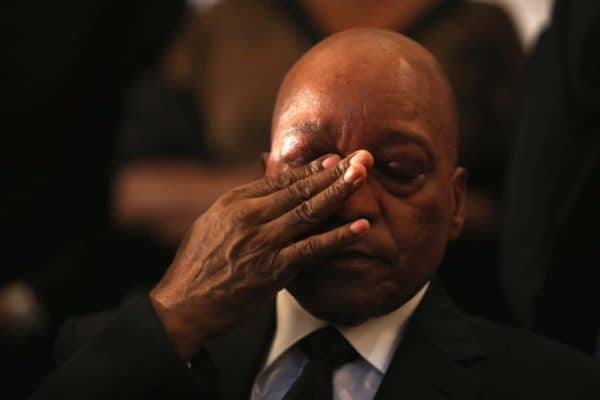 Picture for illustration: Jacob Zuma did not appear in court in person, as the application for yet another postponement of his corruption trial was heard via video link on Monday. Picture: Getty Images/Christopher Furlong

According to the Foundation, the Concourt is calling on parties to submit a 20-page document on how Zuma’s detention possibly affects International Law, as well as “the constitutional implications of his ongoing detention”.

READ MORE: Zuma seeks to drag those who ‘benefited’ from arms deal with him

The parties are directed to file written submissions on the implications and to consider the United Nations’ International Covenant on Civil and Political Rights.

These findings should be submitted before 13 August 2021.

The letter, dated 6 August 2021, was issued to Judge Raymond Zondo, as well as the minister of police, the minister of justice and correctional services, the Helen Suzman Foundation and the council for the advancement of the South African Constitution.

Zuma was slapped with a 15-month jail sentence when he was found guilty of contempt by the Constitutional Court in June for failing to comply with the apex court’s ruling forcing him to appear before the Commission of Inquiry into Allegations of State Capture.

The ConCourt then heard his rescission application challenging the sentence, however, the judgment was reserved in the matter.

Earlier on Saturday, the foundation indicated that it was still awaiting doctors’ reports detailing the health condition of the former president.

“Dear all, following numerous media enquiries about the state of health of [former] president Zuma, the foundation wishes to communicate to all that at this stage we are still awaiting a report from the doctors. We’ll keep you posted on the developments. Please keep him in your prayers,” the foundation said on Twitter.

This is after the department of correctional services announced on Friday morning that Zuma was admitted to a hospital outside the Estcourt Correctional Centre for medical observation.

ALSO READ: Zuma’s hospitalisation: ‘No need to be alarmed yet’, says Foundation

The department said Zuma’s hospitalisation “requires the involvement of the South African Military Health Services”, as has been the case since his incarceration.

It further said, “everyone who is detained, including every sentenced prisoner, has the right to conditions of detention that are consistent with human dignity”.

Meanwhile, the foundation previously said there is no need to panic just yet after his hospitalisation, saying the 79-year-old former statesman was admitted for his annual medical routine checkup.