The six accused are facing charges of murder, attempted murder, conspiracy to commit murder and possession of an unlicensed firearm. 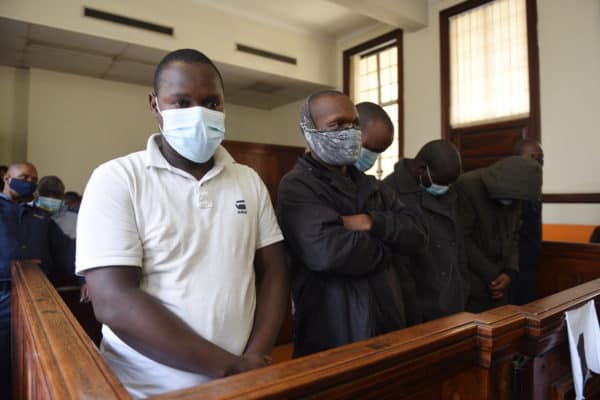 Six suspects appears Johannesburg Magistrates Court, 30 August 2021, on charges related to the murder of Gauteng health department finance officer Babita Deokaran. Deokaran was gunned down outside her Winchester Hills home and she was a key witness in the investigation of protective equipment (PPE) contracts. Picture: Nigel Sibanda

The bail hearing for six men arrested for the murder of whistleblower Babita Deokaran on Monday was postponed to 1 October by the Johannesburg Magistrates Court.

This was after the defence requested more time to conduct further consultations.

Deokaran, who was a senior finance official at the Gauteng health department, was gunned down last month outside her home in Johannesburg, shortly after dropping off her child at school.

The acting chief financial officer for the provincial health department was one of the witnesses in the Special Investigating Unit’s (SIU’s) probe into allegations of corruption involving a R300 million personal protective equipment (PPE) tender.

Deokaran’s murder has brought to the fore concerns around the safety of whistleblowers and witnesses.

Ahead of court proceedings on Monday, members of ActionSA and the Organisation Undoing Tax Abuse (Outa) demonstrated outside court against the granting of bail to the six men.

READ NEXT: Deokaran hitmen only the foot soldiers – bosses pose a bigger threat