‘I’m going to be the president of this country, whether you like it or not’: Malema tells AfriForum

'The sooner you [accept] that, the less chest pains you'll have when that reality comes,' the EFF leader said. 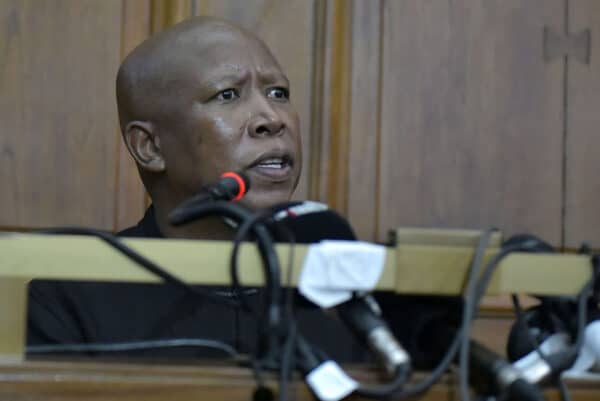 Julius Malema testifies in the Equality Court sitting at the High Court in Johannesburg, 16 February 2022. The case is between him and Afriforum over the singing of "Kill the Boer" . Picture: Neil McCartney

Economic Freedom Fighters (EFF) leader Julius Malema has vowed that he will be elected South Africa’s next president in the near future – whether AfriForum likes it or not.

Malema on Thursday was back at the Equality Court in Johannesburg to testify in the hate speech case that AfriForum brought against him, his party and EFF MP Mbuyiseni Ndlozi, for allegedly singing the controversial struggle song Dubul’ibhunu, which translates to “shoot the boer” or “kill the boer”.

The EFF leader was asked during cross-examination by counsel for AfriForum, Mark Oppenheimer, whether he thought his party would be elected into government, given the Red Berets only received 10.8% of the vote during the 2019 general elections and currently controls no municipalities.

“My point to you is that your party from what I understand has received about 10% of the vote. [As] it stands, it stands no possibility of ever being elected into government. Do you currently run any municipalities for example?”, Oppenheimer asked Malema.

“I’m going to be the president of this country, whether you like it or not,” Malema said in response to the question.

He added: “And I will preside over the affairs of this country, including presiding over you. I think you must start adjusting to that reality. The sooner you do that, the less chest pains you’ll have when that reality comes.”

Asked by Oppenheimer what chest pains he was referring to, Malema said “racist chest pains”.

But Oppenheimer stuck to his guns that the EFF, without significant electoral support, stood no chance of having its leader elected as South Africa’s president.

However, Malema was having none of it, and reiterated his views that AfriForum was a racist organisation.

He said with the 10% the EFF had, it was able to reduce the governing ANC’s national support below 50% during last year’s local government elections.

“You may think 10% is insignificant, but it’s a very huge percentage and we are the only party that is growing in South Africa among the three parties, we have never declined in any election.”

Judge Edwin Molahlehi interjected during the heated exchange and asked Oppenheimer what was the relevance of his question in the hate speech case, to which he conceded the question wasn’t relevant.

“Then I won’t push the point my lord,” Oppenheimer said.

ALSO READ: Shivambu certain of victory in ‘Kill the Boer’ case against AfriForum

AfriForum lodged a civil case against the EFF in 2020, after accusing the party and its leaders of committing hate speech over the singing of the struggle song Dubul’ibhunu.

The organisation believes the song advocates hatred on the grounds of race and ethnicity, and constitutes an incitement to cause harm.

The lobby group wants the Equality Court to order the EFF and its leaders to publicly apologise and to pay R500,000 in damages for singing the song.

This is not the first time AfriForum has challenged the singing of the song before the Equality Court.

In 2010, Malema was found guilty of hate speech for singing the song when he was the then president of the ANC Youth League.

AfriForum has accused Malema and the EFF of violating the 2010 court order.