The grave that had been dug up by grave robbers. Photos: Supplied.

On Saturday, the Hekpoort Police received terrifying news when a case of grave violation was opened at their station.

The owner of a farm at Hartebeesfontein in the Hekpoort area told the police that he had gone to the small cemetery on his farm and found one of the graves had been dug open. Some of the remains were also found on top of the soil, reports Krugersdorp News.

The grave in question belonged to a woman who was born in 1907 and died in 1974. There was also another headstone that had been damaged. 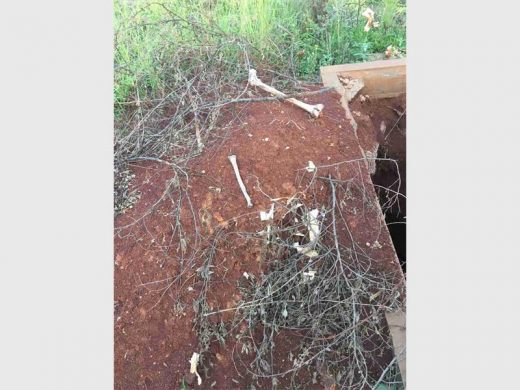 Some of the remains left outside the grave.

Constable Gloria Maswanganye, spokesperson for the Hekpoort Police, said: “The Hekpoort Police are sending out an urgent appeal to the community to help them by coming forward with any information that can lead to the arrest of these people, who have no respect for the dead.”