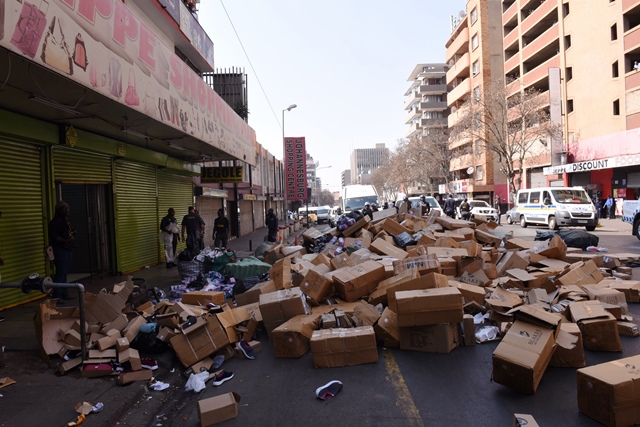 A joint operation by the police and Johannesburg Metro Police Department has led to the recovery of R5 million worth of counterfeit clothing in the Johannesburg CBD.

The raid was conducted on Friday in the same area where police and JMPD officers were attacked on August 1 by a group of foreign nationals who pelted them with stones and other objects.

The officers were later praised by the government for retreating and avoiding a “bloodbath”.

On August 7, about 1,500 officers joined by Police Minister Bheki Cele and Gauteng Premier David Makhura raided the same area, which resulted in more than 600 foreign nationals being detained.

The police brought in trucks to load the recovered goods, which included counterfeit items.

Five vehicles that contained counterfeit goods were confiscated as well as automatic rifles, pistols and handguns.

During the raid, seven police officers were arrested on charges of corruption and defeating the ends of justice after they were caught allegedly trying to sell confiscated goods back to illegal traders.

On Friday, JMPD spokesperson Chief Superintendent Wayne Minnaar said the operation had focused specifically on the area that had been identified as being problematic in dealing with counterfeit goods in the city centre.

“We recovered R5 million worth of counterfeit clothing. We also arrested a suspect for being in possession of a stolen cellphone. Officers also recovered five MTN tower back-up batteries.”

Minnaar promised they would continue to raid the area, which was earlier identified as a “hub” for counterfeit goods.

“We have officers who are patrolling the area daily and we are committed to ensure that law and order prevails there.”