It is expected that the MOU will ensure effective and efficient collaboration and the timeous exchange of information. 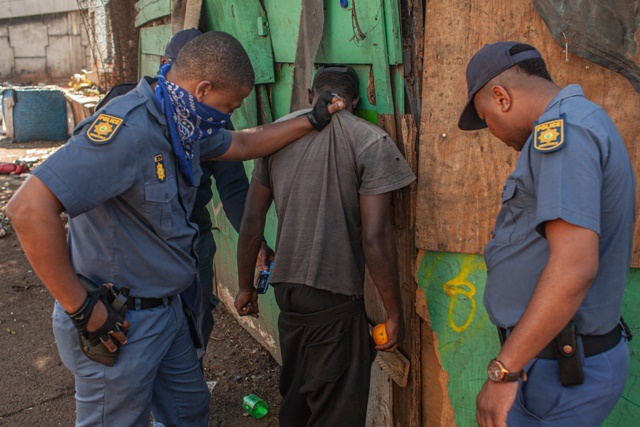 A joint operation with the JMPD (Johannesburg Municipal Police Force), the SAPS (South African Police Service), the GPCS ( Gauteng Province Community Safety) and the" City power Johannesburg" was conducted in the Johannesburg CBD aimed to make weapons and drug confiscations and bring back the rule of law, September 10th, 2019. Photo by Emmanuel Croset

A new agreement on the exchange of information between the Financial Intelligence Centre (FIC) and the South African Police Service (SAPS) is expected to speed up investigations and resulting arrests.

The memorandum of understanding (MOU) between the FIC and SAPS was signed on Friday, in what the organisations say will boost efforts to identify and stem crime.

It is expected that the MOU will ensure effective and efficient collaboration between the two organisations and the timeous exchange of information.

It is also expected that the collaboration will assist in the identification of the proceeds of crime, money laundering, terrorism and the financing of terrorist and related activities, as well as the implementation of financial sanctions based on United Nations Security Council resolutions.

A core FIC function is developing financial intelligence reports which contain detailed analyses and information that can assist police.

According to a statement by the FIC and SAPS, the agreement provides a framework for the relationship between the organisations, and outlines the methodology, safeguarding, confidentiality and utilisation of the information exchanged.

“This is critical to the speed and efficiency with which criminality can be investigated and those responsible for crime are apprehended,” the statement says.

FIC director, advocate Xolisile Khanyile, said at the signing: “The FIC and SAPS have enjoyed many years of effective collaboration in combating financial crime and money laundering. Today and through this MOU, we hope to build on that legacy by enhancing and improving our levels of collaboration and effectiveness in the fight against crime.”

Deputy national head of the Directorate for Priority Crime Investigation, Lieutenant General Yolisa Matakata, added: “Through collaboration on information sharing, we can improve our analytical, investigative and preventive techniques to fight criminality at its highest level.”