Police firearms not marked due to problems with corruption-linked system

Some police firearms can't be tracked because of problems with a system owned by a corruption-linked company, the Portfolio Committee on Police heard on Wednesday. 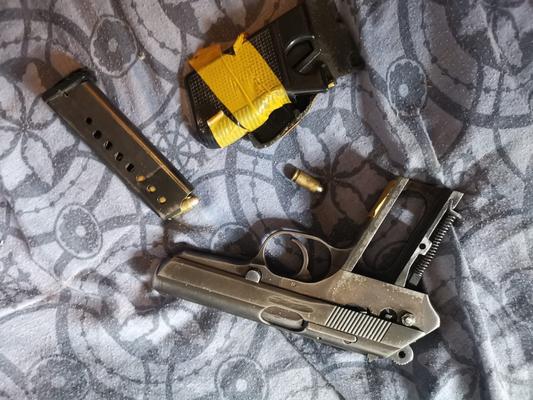 Deputy Police Minister Cassel Mathale said they would stop issuing the unmarked firearms, after MPs serving on the committee expressed their concern.

National Police Commissioner General Khehla Sitole and his top management briefed the committee on their annual performance, where it emerged that some of the police’s firearms are not “dot-pinned” – the marking to track and identify a particular firearm.

FF Plus leader Pieter Groenewald wanted to know why this was the case.

“It’s an obligation to be dot-pinned as well as ballistics, but now police admit that it has not been done. If that firearm gets lost or stolen there is no way to track it. It makes it very lucrative for criminals,” said Groenewald.

The police, through the State Information Technology Agency (Sita), obtained the FPS system along with other systems from the company Forensic Data Analysts (FDA), but FDA remained the owner of the system.

In November 2017, the National Assembly’s Standing Committee on Public Accounts, on the Independent Police Investigative Directorate’s recommendation, said SITA should not pay for any of its contracts with FDA after it emerged in the meeting that SITA awarded a contract for forensic equipment for the police, mostly lights and Nikon cameras, worth more than R900m to FDA without following procurement processes and without there being a reason for FDA being the sole provider.

Then, in April 2018, FDA’s director, former police officer Keith Keating, a central figure in the allegations of corruption against former acting police commissioner Khomotso Phahlane, suspended some of the police’s systems, including the FPS.

He said he did this because he hasn’t been paid in five months.

A legal battle ensued and the systems were turned back on.

However, Sitole told the committee on Wednesday that the system is still not under the police’s full control.

“That’s why it’s so important to get full control,” he said.

He said they were busy phasing out FDA from the system. When this was done, it would be under the police’s full control.

Vuma said it was not all the firearms that were affected – only firearms kept in stock and temporarily issued to police officers.

Groenewald suggested those firearms should not be issued until the system had been finalised under the police’s control.

Mathale said he accepted this recommendation, and Sitole said an instruction to that effect would be issued.

Joemat-Pettersson asked what the time-frame to get the system under control was, and Mathale said they would have to get back to the committee on that one.

The meeting wasn’t a typical portfolio committee gathering, as it was held at the Cape Diamond Hotel as several committee meetings took place on Wednesday, which meant the MPs and the police’s top brass discussed policing in a room adorned with pictures of Marilyn Monroe and James Dean.Joemat-Pettersson also interrupted the question session to congratulate ANC MP Siphokuhle Patrein on her birthday and cajoled DA MP Okkie Terblanche into leading the committee’s rendition of “Happy Birthday to You”.

Government 'confident' all security measures in place to ensure free, fair elections
7 hours ago
7 hours ago

UPDATE: Murder trial of Senzo Meyiwa's alleged killers to begin in April 2022
12 hours ago
12 hours ago

Government 'confident' all security measures in place to ensure free, fair elections
7 hours ago
7 hours ago

UPDATE: Murder trial of Senzo Meyiwa's alleged killers to begin in April 2022
12 hours ago
12 hours ago