A surprise search of the Vukani Mawethu and Jafta Mahlangu Secondary schools on Friday and Wednesday morning yielded damning results. 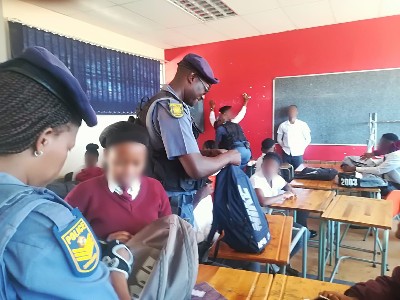 A raid taking place at one of the schools in Mamelodi. Image: Pretoria East Rekord

A raid of two schools in Mamelodi has yielded dangerous weapons and dagga, police have announced.

“It helps a lot, especially when it comes to discipline at school,” she said.

She added the police should continue with such searches because “we have a big challenge at secondary levels of drugs and learners carrying dangerous weapons”.

Maheso said at Vukani Mawethu, police found a learner in possession of a large knife. No learners were arrested, but the police did contact their parents.

“The parents and the school will deal with the matter.”

Maheso said safety at schools “is our first priority because learners are killing each other with these weapons and are abusing dagga”.

“Our main goal is to see that Mamelodi schools, including primary levels, are a crime-free zone.”

He said the raids would continue and that targeted schools would not be informed in advance.

“We spoke to learners about the dangers of carrying dangerous weapons such as knives, which are not allowed on school premises,” he said.

“Police also addressed the learners about substance abuse and gangsterism and how they could destroy their future.”

Maheso warned learners to refrain from drugs and dangerous weapons.

He said police would appreciate tip-offs from learners and teachers.

Sitole responds to Cele statement that he was 'nowhere to be seen' during July unrest
2 days ago
2 days ago
PREMIUM!

Sitole responds to Cele statement that he was 'nowhere to be seen' during July unrest
2 days ago
2 days ago
PREMIUM!