The suspects fled the scene in a White Toyota Corolla after noticing that police were on the way. 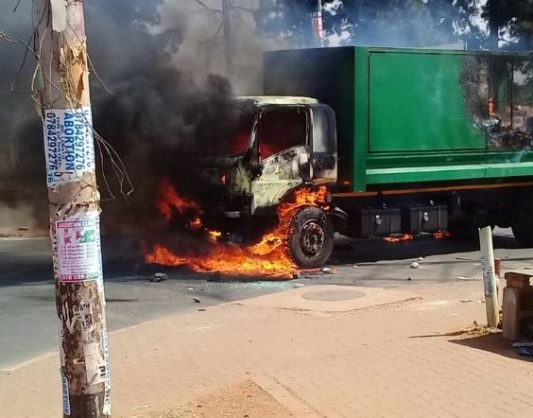 The police in Mpumalanga are on the lookout for several suspects after six trucks were set alight in separate incidents on Monday.

One incident took place in Hendrina, four at Arnot and the sixth truck was reportedly set alight in Kriel.

“At Hendrina, the complainant was reportedly asleep inside a parked truck when he was awoken by a noise of a breaking window of the truck,” Hlathi said.

The suspect that initially ordered the driver to get out of the truck allegedly took out a box of matches and set alight the blankets that were inside the truck.

The suspects then fled the scene in a White Toyota Corolla after noticing that police were on the way. Police gave chase to the suspects, but they have not been arrested yet.

“Four other trucks were also reportedly burnt in Arnot. This was after one of the truck drivers was allegedly ordered to take out his belongings by an unknown male suspect who made accusations that the truck driver was among people that continued to work while others were on strike.

“Thereafter, the said driver saw other trucks that were in the same queue that he was in, burning. The reports suggest that the trucks were queuing to deliver coal at Arnot Power Station,” Hlathi said.

The estimated damage caused by the burning of these trucks amounts to approximately R5 million. No arrests have been made as yet.

“At this stage police are investigating cases of malicious damage to property and request anyone with information that can lead to the arrest of the suspects involved in burning of the trucks.”