Shops, cars, ticket booth windows, access gates and a train were damaged during the attack. 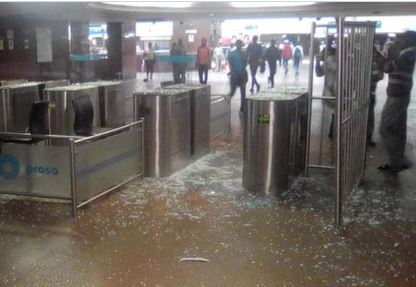 Park Station in Johannesburg was attacked on Tuesday afternoon when groups of people stormed it and damaged property.

According to Passenger Rail Agency of South Africa (Prasa) spokesperson Nana Zenani, the incident took place at around lunchtime.

Zenani blamed criminals for being behind the attack.

She said a group of people had targeted specific areas.

Shops, cars, ticket booth windows, access gates and a train were damaged during the attack.

Zenani said she could not connect the attacks at the station with the recent decision by Prasa to terminate the contracts of 20 private security companies.

She added the rail agency had a good relationship with labour unions, saying she does not want to blame their members without any evidence.

“According to security personnel stationed at Park Station, a number of criminals forcibly entered the station attacking and looting some of the shops, breaking glass access gates, ticket booth windows and cars. More alarming, however, was the stoning of one of the train sets resulting in a broken windows

“Fortunately, no one was injured at the time and we are thankful for that. Our security guards were on duty when the criminals entered the premises. It was a surprise attack and I can’t say that our guards were overpowered. There was no confrontation between our guards and the group of criminals,” said Zenani.

She added the station had been secured and police officers were on the scene combing the area, and viewing CCTV footages to identify the attackers.

Zenani said the situation was calm and trains were running on schedule.

She has appealed to commuters to continue using the trains.

Zenani asked people with information about the attack to contact the police as soon as possible.

Prasa group CEO Dr Nkosinathi Sishi said: “Prasa will increase security at the station along with a police presence. It will not allow itself to be harassed by criminals. We have the necessary security personnel to ensure such an incident does not repeat itself.”