Inside the Melville shooting: What we know so far

Video footage captured the moments a black BMW SUV drove past Poppy's restaurant and opened fire on its patrons. 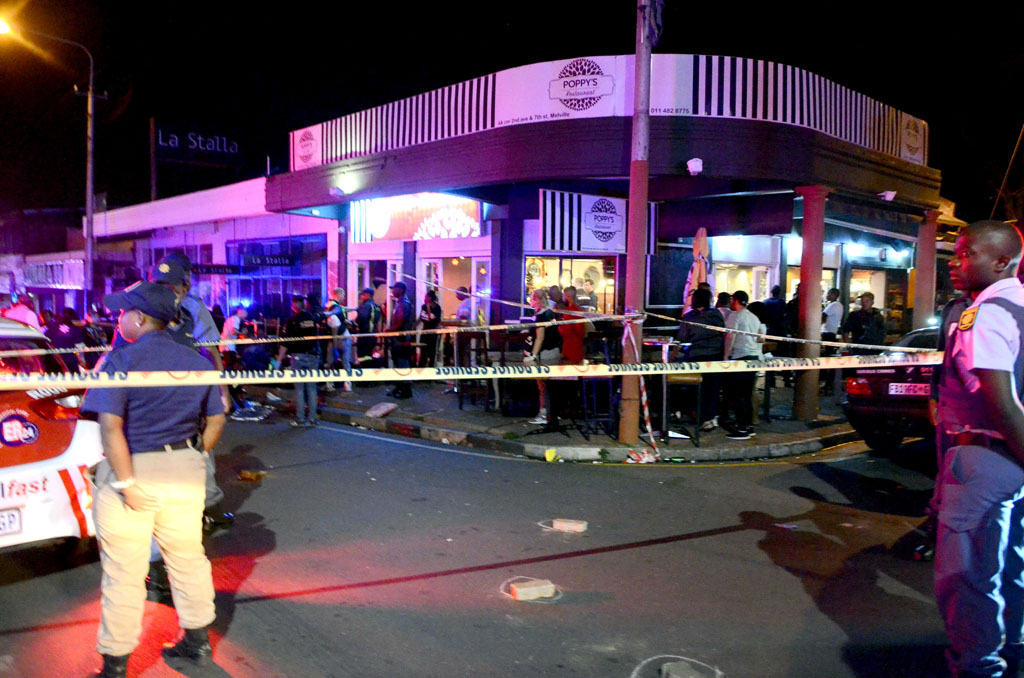 Policemen intervene at the scene where two women were killed when a man opened fire on a popular restaurant in the Melville district of Johannesburg in the early hours of January 1, 2020. Picture: Jamaine KRIGE / AFP

A deadly shooting just an hour into the new year in Melville, Johannesburg has left residents rattled.

The drive-by shooting left two women dead and six other people injured, one in critical condition.

Video footage captured the moments a black BMW SUV drove past Poppy’s restaurant and opened fire on its patrons.

Some victims were shot in the pelvis, some in the leg, the back and another is in critical condition after being shot in the head.

On Friday, Gauteng acting premier Panyaza Lesufi assured the media that police are close to “cracking” the case.

“Police are convinced…that they are about to crack this case in terms of the information they have gathered and the relevant people who provided the information,” Lesufi said.

“They have managed to take all the CCTV footage that is available in the area and managed to [assemble a] team that is tracking all the relevant information.

While no arrests have been made yet, he added that police have dug up some vital information so far.

“The car that was involved was a cloned car, the number plate does not match the plates of the car. It is also a car that belongs to somebody who was not nearby,” Lesufi said.

Lesufi also condemned the attack, saying this type of violence is a burden on hospitals.

“We are in a serious situation and we need to confront this as a society. We can’t have these violent activities where people shoot each other, stab each other and fight. It’s a huge burden on the resources of the hospitals.”

One victim of the shooting, Mortimer Williams, recounted what happened that night.

Williams said he stepped outside to wish his friends a happy new year when he heard what he thought were fireworks going off.

“But then I felt this thud against my back and that took me to the ground. I thought, ‘those were not crackers, they were gunshots’,” he told News24.

Williams was shot through the pelvis, the bullet narrowly missing his kidney and colon.

Petunia Roets was also shot through the pelvis while standing inside the establishment.

“We were in the restaurant and we saw people falling. When we looked, I just felt this hard blow to my pelvic area and I said: ‘I’ve been shot’,” Roets said.

Speaking to the media at Helen Joseph Hospital, Roets said she is recovering.

While she has lost some sensation in her legs, she is receiving physiotherapy.

The tragedy has left not only the Melville community, but also those who frequent the popular 7th street, reeling.

On Wednesday, a vigil was held outside Poppy’s for the victims of the shooting.

Margret Arnolds, MMC for Community Development in the City of Johannesburg and friend of the owner of Poppy’s called on the justice system to bring the gunmen to book.

“We are also here because we are tired of these senseless killings, and we wanted to be here to prove to people that, as women, we all come together and believe we must give support wherever women are killed,” Arnolds said.

“We are calling on the justice system…to start looking at why people are having this leeway to just go around and shoot. We believe that something needs to be done because you can’t have killings every day, it’s as if it is the norm.”