Police Minister Bheki Cele listened as the parents said that some people even accused them of being linked to their child's disappearance. 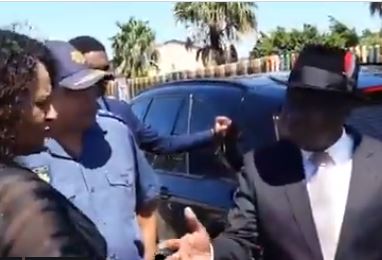 Screengrab of Twitter video of Police Minister Bheki Cele seeing exactly how close to her front door #TazneVanWyk was before she disappeared from her home in Clare Street, Cape Town.

Police officers were allegedly too scared to search a property pointed out as a potential hiding place of Moyhdian Pangarker when he was sought for the disappearance of Tazne van Wyk, her grieving mother told Police Minister Bheki Cele on Wednesday.

Carmen van Wyk said that after eight-year-old Tazne disappeared on February, 7, one of the people searching for her reported a sighting of Pangarker. At the time, he was thought to have been the last person seen with Tazne at the tuck shop just outside their home.

Unsuccessful phone calls were made to police at first. When nobody answered, residents went to the police station to inform them that they might know where Pangarker was.

The mother said police sent just one van to the property where there had been a sighting of Pangarkar and the child.

“When they got in front of that house in that same street, the police told them: ‘I’m sorry, we’re not going in here because we were thrown with stones.’ Can it be that a policeman can refuse to go in where there was a possible lead?” asked Tazne’s mother, Carmen.

As tears welled in her eyes, she maintained an angry strength and told Cele what her family had been through.

With Cele squeezed on the couch between her and Tazne’s dad, Terence, Carmen said police officers should have brought back-up, or at the very least “one simple army van” to check out the house.

This was a reference to the army vehicles patrolling parts of the Cape Flats to assist police action against gangs.

She said after they complained about not getting enough information on the search for Pangarker and Tazne, the police became more active.

She added the family felt as if the police were relying on them for new information.

As they spoke, their voices were drowned out every few minutes by passenger jets flying metres above their corrugated iron roof, on their final descent to Cape Town International Airport.

Their home was hot from the summer sun, and behind the couch Tazne’s award for outstanding achievement in Grade 2 Mathematics hung on the wall. Home-crafted framed collages of family photographs filled the wall space, with inspirational quotes taking up the available shelf space.

Cele listened as the parents said that some people even accused them of being linked to their child’s disappearance.

He was stunned to see how close the front door of the family’s home was to the shop where Tazne was last seen.

The Van Wyks were upset that the media knew before them that Pangarker had been arrested in Cradock in the Eastern Cape, and that a body had been found on the side of the road near Worcester.

“Why does the media have to hear about everything that’s happening and afterwards they [police] come to us when we have already seen it on the phone in the news and heard about it in voice notes?” asked Carmen.

News24 asked Carmen for permission to report on their conversation with Cele, and she agreed.

He said a task team, which included the Department of Justice and Correctional Services, will examine all aspects of Tazne’s murder, including how Pangarker absconded from parole and why he was released, given his long list of convictions.

“I have listened to the family. They have raised some few issues and these are issues that are going to be pursued and a report will go to the president,” he said.

Amid calls outside the house by some neighbours for the death sentence, Cele said South Africa’s Constitution forbids it.

He said he had been on the phone daily during the search “pushing” police to find Tazne.

“Besides the few things that they might have done incorrectly, they [the police] put in a lot of effort.”

He would not use the word “happy” to describe his response to the investigation.

“Happy? I can’t be happy with a dead child. If the child was alive, I would be very, very happy. Unfortunately, our best has become the worst when we find a dead kid.”