Royal succession battle turns nasty once again as police are called after reports of assault at family home. 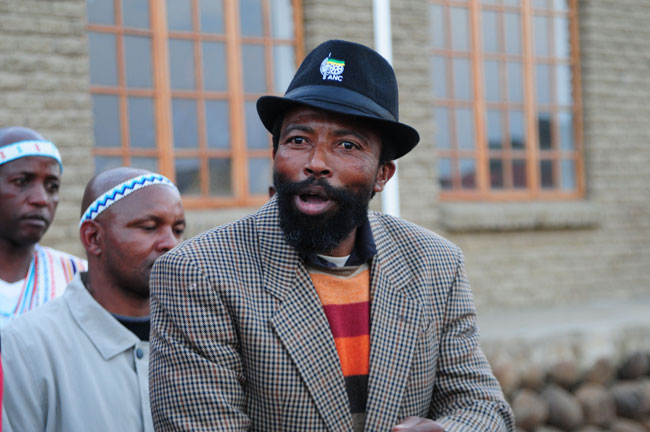 Babalo Papu, an advisor to AbaThembu King Buyelekhaya Dalindyebo, has approached police to open a criminal case against some members of the royal family – including acting King Azenathi Dalindyebo.

Papu opened a case of assault with intent to cause grievous bodily harm against acting king, Azenathi Dalindyebo, his mother Buyiswa Majiki and Azenathi’s spokesperson, uncle and advisor, Siganeko Dalindyebo, and others.

Majiki is an Eastern Cape High Court judge and the former wife of Buyelekhaya Dalindyebo.

Called for comment, on Thursday Majiki said: “Indeed it came to my knowledge that a criminal case has been opened against me but I have no knowledge of these allegations or circumstances surrounding the case.”

The case was opened at the Madeira police station in Mthatha on Wednesday evening, according to police.

It came a day after the police were called to a Maiden Farm address and rescued Papu from an alleged assault by a group of men, police spokesperson Colonel Sibongile Soci said.

On Thursday, Soci said: “[Police] can confirm that a case of assault GBH has been opened for investigation. The complainant will be interviewed further to ascertain other information that has surfaced regarding the investigation.”

Siganeko Dalindyebo confirmed he was involved in the alleged assault, saying he found Papu talking to his wife on his premises.

Both Papu and Siganeko find themselves on opposite ends of the father-and-son battle for kingship.

“I, Prince Siganeko Zanothando Dalindyebo, feel I was provoked by Babalo and the people who he was conniving with and gave him my wife’s cellphone number. I felt it was an attack on my integrity and manhood and to the safety of my family and those close to me, by finding my sole enemy inside my premises.”

“How naïve can he be as a person to go to a home of a person [when] he knows they don’t get along, based on the Dalindyebo succession debate, communicating with my wife and entering my gate? He can’t expect me to feel safe. I felt cornered in my own space from my own enemy. I felt I should protect myself and loved ones from my enemy,” Siganeko said.

Siganeko said his wife spends most of her time alone in Mthatha.

He is based 50km away at Bumbane Great Place where he serves as a traditional leader and as one of the advisors to acting king Azenathi.

Meanwhile, Soci said: “SAPS can confirm a complaint was received yesterday at about 15:00 and police were dispatched to the scene at Maiden Farm. Upon arrival, they found a visibly assaulted man and intervened by removing the injured person from immediate danger and also ensured that his vehicle was removed from the premises.”

Soci earlier said Papu had been advised to open cases of assault, crimen injuria and malicious damage to property against the “people who assaulted him and damaged his vehicle”.

Contacted for comment, Papu responded with a short statement he had posted on his Facebook page on Tuesday night: “I am in good shape, I cannot go into details or merits of this matter as advised by my legal counsel.

“I can only confirm that I was brutally attacked by Sganeko, Azenathi, Azenathi’s body guard, [whose name was withheld] and one more guy I still need to find his name (sic).

“This is all I can say, thank you very much.”

News24 tried several times to get comment from Azenathi for his side of the story.

Attempts included several phone calls and text messages to him since Tuesday.

His phone was off and his spokesperson, Siganeko, declined to speak on his behalf, saying the acting king should speak for himself.

The latest drama came a day after AbaThembu King Buyelekhaya Dalindyebo appeared in the Mthatha Magistrate’s Court for assault.

He disowned Azenathi and his claim to the throne, demanding a paternity test.

The assault case was opened by Azenathi on 13 March after Dalindyebo allegedly trespassed on the Bumbane Great Place palace, outside Mthatha, and allegedly used an axe to attack Azenathi at around 03:00.

Buyelekhaya Dalindyebo is currently staying at Nkululekweni residence in Mthatha, following his early release from prison in December.

He only served four years of his 12-year sentence when President Cyril Ramaphosa granted him special remission parole as part of a larger category of offenders.

He had been sent to jail in 2015 for arson, kidnapping, assault with intent to cause grievous bodily harm and defeating the ends of justice.

He was found guilty of terrorising his subjects in the 1990s.

The father-and-son war dates to 2016 when Azenathi went against his incarcerated father’s advice and ascended to the throne.

The king wanted his wife to act on his behalf and had written a series of prison letters advising the then University of Free State student, Azenathi, to focus on his studies.