The attackers allegedly stole the victims' belongings and locked a female employee in the bathroom before fleeing the scene in the family's white Chevrolet bakkie.

The scene outside a victim's farm in Houtpoort. Image: Heidelberg/Nigel Heraut. Photo for illustration only.

Three men, including an employee, are due to appear in the Delmas Magistrate’s Court after being arrested following a farm attack in which a woman was strangled.

According to Mpumalanga police spokesperson Brigadier Leonard Hlathi, the men also robbed the family of their belongings on Wednesday at Sundra near Delmas.

“Chantel Kershaw, 44, was preparing to resume her daily duties at the farm. She then informed her employee to assist in loading a lawnmower into the bakkie when she saw two armed men inside the yard.

“The men are said to have instructed the employee to take off his clothes before tying him up and [telling] him to lie down,” Hlathi said.

They then allegedly attacked the woman, who was screaming for help, strangled her to death and went to the house, where they assaulted Kershaw’s mother with a firearm.

The attackers allegedly stole the victims’ belongings and locked a female employee in the bathroom before fleeing the scene in the family’s white Chevrolet bakkie.

Kershaw’s mom alerted the neighbourhood watch about the incident.

“Police also received information and, while on their way, a high-speed chase ensued between the suspects and the neighbourhood watch group, which resulted in the vehicle driven by the suspects overturning at the R50 road near Delmas.

“The suspects crawled out of the car and tried to escape but were caught shortly thereafter,” Hlathi said.

They were both handed over to the police, who arrested them. Police opened a case of murder and robbery.

They also recovered a firearm inside the overturned vehicle. A firearm magazine with ammunition was also recovered. Other items found included belongings which the police believe were stolen from the victims, as well as a bloodstained jacket.

Police continued with their investigation and arrested a third man, aged 40. This man is the employee who had earlier been made to take off his clothes, which police described as “an act”.

The three are expected to appear in the Delmas Magistrate’s Court on Friday. They are also facing additional charges of the illegal possession of a firearm and ammunition as well as the possession of suspected stolen property.

Mpumalanga police commissioner Lieutenant General Mondli Zuma strongly condemned the farm attack. He also welcomed the collaboration between the farming community and the police which led to the arrest of the men. 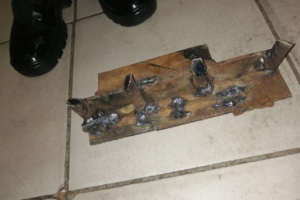 'I loved them like my own', says former nanny of SA children murdered in NZ
1 day ago
1 day ago

'I loved them like my own', says former nanny of SA children murdered in NZ
1 day ago
1 day ago