This evidence was taken by a private investigator who sent it to a laboratory in Gauteng. 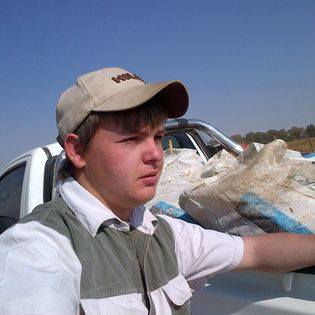 Blood samples taken from the bakkie of Brendin Horner, who was murdered on a farm in Paul Roux in the eastern Free State, belong to three men, a court heard on Friday.

This was revealed during the bail application of Sekwetje Mahlamba and Sekola Matlaletsa, who are accused of strangling 21-year-old Horner to death on 1 October.

Mahlamba and Matlaletsa appeared in the Senekal Magistrate’s Court on Friday morning where they applied for bail. The matter was postponed to 20 October.

Opposing bail, the State called one of the investigating officers, Captain Gerhardus Myburgh to testify.

Myburgh also told the court that Horner suffered stab wounds to his head, shoulder, arm and hands but that the cause of death was strangulation.

Myburgh told the court that bloodstained clothing items and a pair of shoes were seized from Mahlamba’s home when he was arrested and that clothes that had just been washed were taken from Matlaletsa for forensic analysis.

This analysis is still outstanding.

However, Myburgh told the court that blood was taken from the inside and outside of Horner’s bakkie which was found around 13km from where his body was discovered.

This evidence was taken by a private investigator who sent it to a laboratory in Gauteng.

The results of the analysis revealed that the blood samples collected came from three different men, Myburgh alleged.

Police also collected palm and fingerprints from the bakkie which is still being analysed and compared to the fingerprints taken from the accused.

News24 earlier reported Mahlamba and Matlaletsa allegedly boasted about assaulting a white man, which was overheard by one witness while the pair were at a tavern in Paul Roux on Friday afternoon on the day that Horner’s body was discovered.

Another witness is said to have spoken to Matlaletsa who boasted about the same attack and gave details of the assault.

The details matched the attack on Horner which led police to affecting the arrests on both accused.

Mahlamba, who also took the stand to give evidence, said he knew nothing about Horner’s murder and that he was with his girlfriend on the night that he was murdered on a farm in Paul Roux in the eastern Free State.

The State, however, claimed that his girlfriend said they went to bed, but when she woke up later in the evening, Mahlamba was gone and only returned during the early hours of Friday morning.

Matlaletsa, who applied for bail via an affidavit read out by his legal aid attorney, told the court that he would be pleading not guilting and chose his right to remain silent on the merits of the case.

Defence attorneys expected to cross-examine Myburgh in the next appearance.