Meyer said drivers have post-traumatic stress and were scared when they reported for work amid relentless attacks and seemingly slow intelligence sharing by the police. 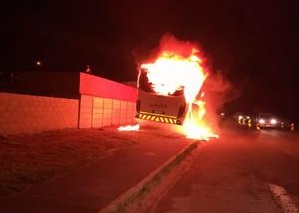 One bus driver has been killed, and 13 buses have been torched this year already; and, more than 200 of the company’s buses are stoned every month.

“At least just say something about it. We just feel very alone out there,” GABS CEO Francois Meyer appealed to the Western Cape legislature’s committee on public transport which he was briefing.

Meyer said drivers have post-traumatic stress and were scared when they reported for work amid relentless attacks and seemingly slow intelligence sharing by the police.

He added it was so bad some other public transport operators were paying protection fees to taxi associations.

The most recent was the torching of buses in Khayelitsha in a bid for toilets and running water by people who have occupied plots in the area.

Meyer said it emerged the police knew something was afoot, but did not warn GABS.

They apparently watched as the buses were taken over and torched, and the drivers’ radios were taken so they could not warn their control room to divert other buses.

He added the trauma on the pupils caught up in the Khayelitsha protest would have been immense as they sat on buses diverted urgently to find safe routes to drop them off for their exams.

Things have become so bad that bus drivers have the option of wearing a bulletproof vest to work. The drivers and passengers are robbed so frequently that the City of Cape Town also put special officers on board to travel with the passengers to help if necessary.

This led to a decline in robberies of the drivers and passengers, but when the officers were redeployed elsewhere, the attacks started rising steadily again.

“Stones, bricks, half a brick, anything [is] thrown at the bus drivers and the buses themselves,” said Meyer.

The company deals with between six to eight armed robberies on their buses per week, with the robbers stealing the drivers’ cash, and then moving through the bus robbing passengers of wallets and cellphones.

Drivers’ cabins used to be fitted with bulletproof glass, but this exceeded the maximum weight allowed for the front of the bus, and it was also difficult for a driver to get out of the cab quickly if the bus was torched, so they were removed.

The drivers had asked that the stone-proofing be removed from the bus windows because it was impairing their ability to see the road properly.

He said the conditions on the road while driving were also extreme – with taxi drivers not adhering to road rules.

The MyCiTi bus service to Khayelitsha has already been stopped.

“For us, it feels largely like government ignores the fact that we have to operate their contract in warzone conditions,” Meyer added.

GABS is contracted by the Western Cape provincial Department of Transport to provide subsidised transport for passengers on about 250 000 trips per day.

He said the company constantly reinvested money into bursaries, and paid more than R300 million in tax last year, in addition to the social programmes it supports.

Meyer added 2 500 drivers were supporting up to 14 000 people with their salaries.

The company’s majority shareholder is the SA Clothing and Textile Workers Union through Hosken Consolidated Investment, and he said he could not understand how a company which benefitted the communities it worked in could be targeted.

Although it has insurance, it only gets the value of the bus when it was bought. So, if a 10-year-old bus is torched, they only get R500 000 of the R2.3 million it now costs to buy a new bus. It is expecting its insurance premiums to increase given the attacks.

Meyer said the City of Cape Town assisted with on-board policing, which brought crime on the buses down, but the unit had to be deployed elsewhere and the robberies have gone up again.

He added some other transport companies had opted to pay protection fees to a taxi association to protect their buses.

Meyer said there was no evidence of taxis being behind the attacks, but there were recorded cases of intimidation in that sphere.

“The decision-makers: they hear and they listen, but they have never experienced it as we experience it every single day. It is shocking,” he added.

The City’s community safety MMC, JP Smith, said there was a constant assault on infrastructure and public transport underway, including MyCiTi.He blamed the lack of criminal justice consequences for the continued attacks.

Meanwhile, Transport MEC Bonginkosi Madikizela said in a statement following two shootings near taxi ranks Cape Town on Monday and Tuesday, there were increasing reports of extortion by criminal elements allegedly aligned to Cata and Codeta.

“Authorities have been inundated with complaints from staff and learner transport operators, as well as private companies, of their vehicles being stopped at ‘roadblocks’ set up by uniformed taxi industry ‘patrollers’ in marked vehicles, who impose ‘fines’ or ‘release fees’ after redirecting vehicles to the ranks that they control,” a statement said.

A multi-agency meeting was planned to discuss the taxi shootings and claims of extortion.