A Crime Intelligence report indicated a dangerous weapon was operationalised and led police to a gathering in Braamfontein where students were in attendance. 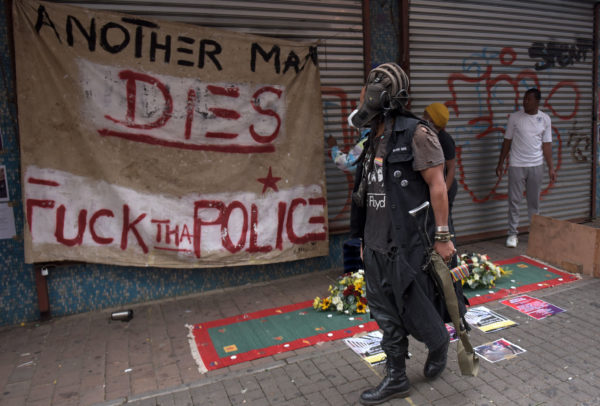 Visual artist Ayanda Mabulu attends the Artist In Revolution commemoration on Wednesday. This was in remembrance of Mthokozisi Ntumba who was shot dead by police during a student protest last week in Braamfontein, Johannesburg. Picture: Nigel Sibanda

Gauteng police have been ordered to conduct an urgent probe into an illegal high-calibre firearm that was found in the possession of protesting students in Braamfontein on Wednesday.

The automatic rifle of Israeli-make had a loaded magazine in it.

Students and artists took to Braamfontein on Wednesday to conduct a commemoration in remembrance of the late Mthokozisi Ntumba who was shot by police during a student protest last week.

They have since been calling for De Beer Street to be renamed after Ntumba.

Peters said police have been on high alert monitoring protests by students of various tertiary institutions in Gauteng, particularly in Johannesburg.

She said a Crime Intelligence report indicated a dangerous weapon was operationalised and led police to a gathering in Braamfontein where students were in attendance.

“It is at this gathering where members observed two students in Stiemens Street carrying an automatic rifle,” said Peters.

“The officers kept a close watch and saw the pair drive off in a vehicle, the car was followed and ultimately stopped by the Johannesburg Flying Squad and the Tactical Response Team in Auckland Park. Police searched and found in the vehicle an automatic rifle of Israeli-make, with a loaded magazine.”

She said that 24-year-old male and 21-year-old female suspects were arrested immediately and are expected to appear in the Johannesburg Magistrates Court on two charges of possession of an illegal firearm and ammunition and possession of a dangerous weapon.

She said police would be conducting further investigations on the case.

“We took the weapon and as part of the investigation we will be carrying out further investigations to find out if the weapon had not been previously used in ill doings,” she said.

Mawela said that it was worrying that such weapon was in the arms of a student “notwithstanding the question why a firearm of this calibre was brought to a gathering of students in the first place”, cited the provincial commissioner.”